Home / economy / The cash dollar exchange rate has reached 26,50 UAH/$. 3 scenario for the hryvnia on March 10

The cash dollar exchange rate has reached 26,50 UAH/$. 3 scenario for the hryvnia on March 10 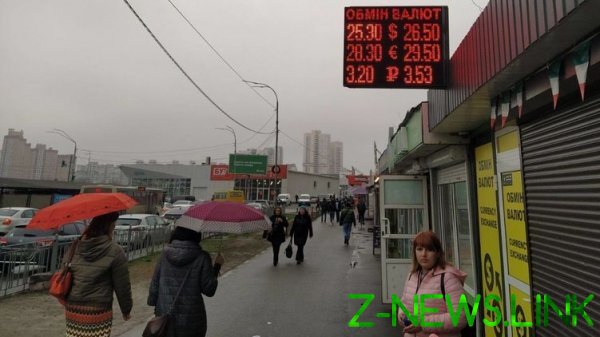 The collapse of oil prices and the global financial markets has provoked a March 9, the excitement and the sharp appreciation of the dollar in the cash market in Ukraine. From the few operating banks, the cash exchange rate on sale people jumped an average of 5-7 cents and reached 25.20 UAH/$. In particular, such a price tag set And the commercial Bank and state UGB. The minimum cost amounted to 24,95 UAH/$ (Kredobank).

Buyout banks left Friday courses – 24,60-24,75 UAH/$. It is obvious that while bankers are not willing to overpay for foreign cash. Since there is no important course guide. March 9 due to a holiday in Ukraine, the interbank market is not working, which usually sets the tone for prices in the box office, and shows in what direction we are moving courses.

“Skyrocketing prices on the spot wholesale market. By the evening hours of Monday put 25,70 UAH/$ on the sale and 25,30 UAH/$ on the purchase. Of course, the market is illiquid, as is the output. But it is clear that the news about falling world oil markets and falling alarmed the population. Still people do not react strongly to exchange rate jumps, and now tell us that they began to actively buy the dollar”, – said “the Country” financial analyst Vasyl nevmerzhytskiy.

25,30-25,70 UAH/$ – not the highest prices for Monday. Because the Finance company put an even higher courses. The average range on the sale of foreign currency in non-Bank exchange offices amounted to 25,60-25,80 UAH/$, and maximum prices in individual speculators reached 26,50 UAH/$ (photo).

There is no doubt that the price spread will remain broad until the opening tomorrow, March 10, the interbank trading. The first non-cash quotes will show the mood of the banks and their customers, and after all expect to see the exchange rate level, which, as expected, the financiers, will protect the national Bank sales of the dollar from its reserve.

It is not excluded that the NBU since the opening of the interbank market will supply a quote, and will offer foreign currency in support of the market. The regulator did so in a difficult to rate periods. When I realized that exporters will hold the currency until you understand what the maximum price can sell it.

There is an alternative scenario, which officials have used just a week ago, to push for serious currency sale of a major player. In Ukraine is “Naftogaz”. It is known to, or sells the dollar proceeds for gas transit from the Russian “Gazprom”, or for winning in Stockholm arbitration. His hand on the interbank market typically learn on large sales of state-owned banks serving the state monopoly. Most often it is Oschadbank, Ukrgasbank, Ukreximbank or.

Sales controller or state-owned banks may prevent a boom in the interbank market. Not allowed to raise non-cash quotations much above Friday’s close – of 25.01-of 25.02 UAH/$. The collapse of world markets will push up the dollar in Ukraine on Tuesday.

Especially if neither Naftogaz, nor the national Bank will start foreign currency sales on the interbank market since the morning on March 10.

Note that the decision to support the hryvnia exchange rate due to interventions of the national Bank and “Naftogaz” or not is purely political. Depends on whether they want the Ukrainian government to help holders of government bonds (and other assets in national currency) withdraw money from Ukraine at a relatively low rate or not. The fact that the hryvnia will be converted into the currency of the country and livaditis at least in the short term (because of the panic on world markets) inevitable.

We will remind, oil war, which today launched Russia and Saudi Arabia, hit hard on the main financial markets in the world. On the morning of March 9, collapsed Asian stock indexes.

As reported, the dollar on the black market of Ukraine has soared to almost UAH 26 on sale