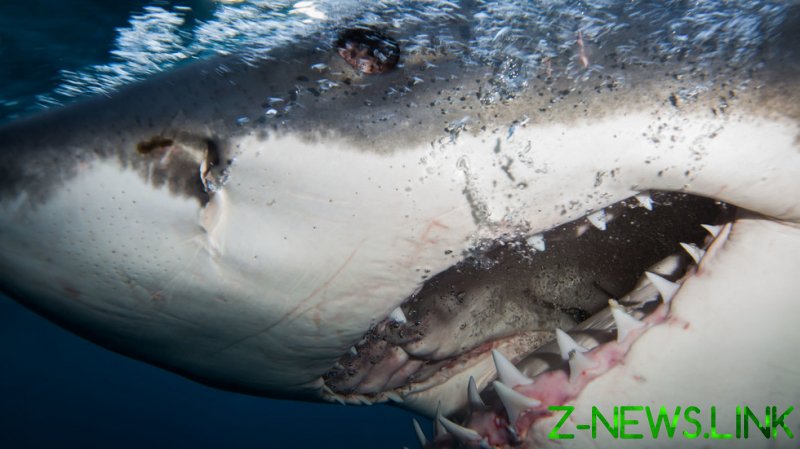 Ah come on, if you sing it out loud you’ll know the tune. It’s the bit from the movie ‘Jaws’ that lets you know that the great white shark that likes to snack on girls in bikinis is in the water and about to chew your leg off.

Anyone’s leg off. It just wants to eat. Eat, eat, eat. Kill, kill, kill! It’s a ravenous beast designed to feast on blood. Even the tiniest bleeding paper cut on your finger, and he can smell it from about 400 miles away and he’ll be on his way to eat you.

Officials Down Under want to rewrite the language used around a shark enjoying a human sandwich, and it should no longer be a ‘shark attack’. Oh no. It should be an ‘interaction’ or a ‘negative encounter’ – I guess a ‘negative encounter’ would be the one where you hop along the beach on one leg thereafter on account of a shark having ripped the other one off and swallowed it? Although the existence of a ‘negative encounter’ implies that there can be a ‘positive encounter’… maybe that’s when the shark just snaps your toe off?

It’s all about the language, you see, as is so often the case these days about so many things. To change the perception of those huge killing machines that dive and glide and hide under the waves, territory that most definitely is not natural human terrain.

You can’t see him, that beast that views you only as a meal. But HE can see YOU! Then he bursts out of the sea… with YOU in his mouth, complete with snorkel and silly flipper boots. Or maybe the Lilo you were lounging on, bursting with a limp blast of air.

Oh well. Nevermind. You’re human, flesh and blood. Meat and bone. Sharks like a bit of flesh and blood, meat and bone. I’m willing to bet at least £5 that there has never been a veggie great white shark. Ever. Not in the hundreds of millions of years they’ve been swimming the oceans sniffing blood.

If Jaws and chums want to check you out, they use their mouths… with all those teeth. “Sharks don’t have hands so, if they want to explore something, they mouth it,” Nathan Hart, a professor at Macquarie University, told the Sydney Morning Herald, before adding helpfully: “Very rarely are humans consumed by sharks.”

Oh dear. He was just saying hello. “G’day mate! Oops, was that your leg? Sorry for the amputation.”

And Professor Hart doesn’t want folk to be killing sharks, especially as many are endangered species. Err, like how? Are they gonna beat them to death with a canoe paddle? My money’s on the shark, mate.

Words such as ‘attack’ and ‘bite’ tend to create a negative perception, say scientists such as Leonardo Guida, a shark researcher at the Australian Marine Conservation Society. And they should be softened “because it helps dispel inherent assumptions that sharks are ravenous, mindless man-eating monsters.”

Australians know a thing or two about sharks, though. Eight people were killed in ‘shark-related incidents’ last year. They get a lot of sharks down that way. You often see stories about them on the news, after they’ve taken a bite out of a surfer.

They have big mouths, those sharks, but Jaws doesn’t talk much. He tends to swim away before the local news reporter arrives. All they can do is interview the surf dude with a HUGE bite mark in his board instead, and who cares what he has to say anyway?

Bureaucrats in the Aussie state of New South Wales, home to surf city Sydney, now generally refer to these aquatic encounters as “incidents” or “interactions.” Up in Queensland, that state’s SharkSmart website advises how to reduce the risk “of a negative encounter with a shark.”

Even the surf dudes that are most at risk because they, to a shark down below, look a bit like a juicy seal in their wetsuits are rejigging the lingo. Cooper Allen had an encounter with a great white shark five years ago that left deep scars in a leg. “I tell people, ‘I had a bit of a run-in with a man in a grey suit.’ I prefer it to be a bit light-hearted… I don’t want to make other people uncomfortable.”

The question that comes to mind about all this is, though: has anyone actually asked the sharks? They might quite like their mean, man-eating image. It’s no bad thing, is it? It’s far better than being a salmon or a tuna or a nice haddock. Who would you rather take on in a fist fight, Mike Tyson or RuPaul?

You’d be an idiot to mess with Jaws, especially as he’s the size of a school bus and has 300 teeth. I reckon if you had to choose to be an aquatic creature, you’d do well to pick a shark. Though, I prefer dolphins myself.