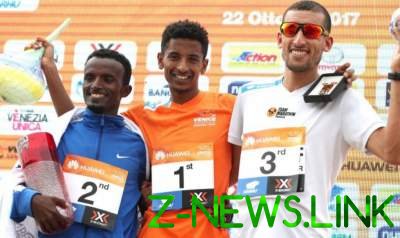 A motorcycle escort led the leaders of the race in the wrong direction.

The winner of the Venice marathon, which was held October 22, was an Italian athlete Eritrean origin AOB, Jevrejeva. Partially him the victory brought the mistake of one rider.

AOB, Jevrejeva – the first since 1995, the Italian who managed to win this marathon. To the middle distance formed the group of seven athletes that left their closest rivals (including, Jevrejeva) for a minute. However, a motorcycle that pointed the way to the leaders, took a wrong turn, and took them for themselves.

Thanks to this group of participants, among whom were, Jevrejeva, took the lead with former leaders returned to the race in the 25th mile, but by then they were already behind by a minute. The Italian finished with a time of 2:12:16; this is his first victory in the marathon. The second came to the finish line, the Eritrean athlete Mohammed Moussa, his time was 2:15:14.