Home / Video news / The Americans staged a mass swim on the pumpkins. Video

The Americans staged a mass swim on the pumpkins. Video 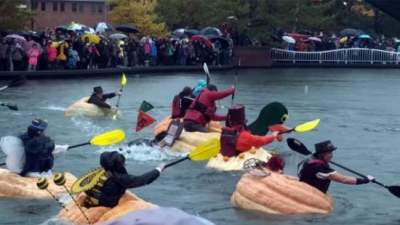 In the United States was the traditional Pumpkin regatta

In the us state of Oregon held its annual Pumpkin regatta. This year it was held for the 14th time.

It is reported that the Pumpkin regatta held at the end of the harvest season, pumpkins. The regatta participants usually decorate their pumpkins, uses a variety of paddles for yourself and dress up in interesting costumes. The rowers were dressed in costumes of the police, fire and even bees. One of the pumpkin boats was made in the form of a duck.

Judging by published online videos, this year the regatta was held under heavy rain, which, however, did not bother the fans of the Pumpkin regatta. For the swim, watched by several thousand spectators.