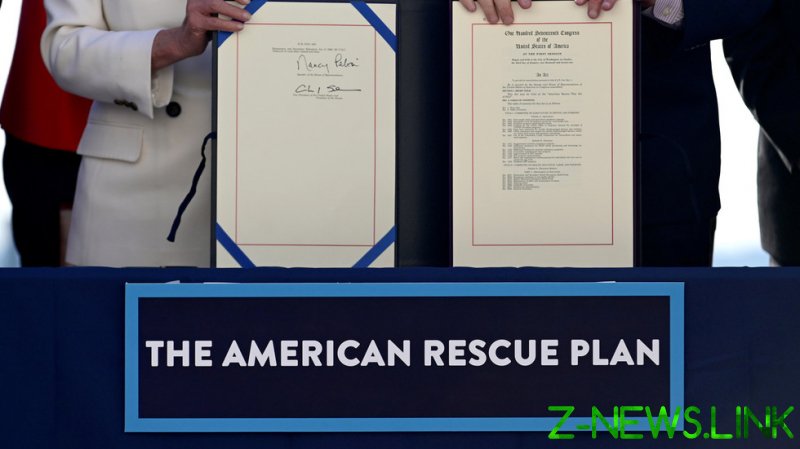 In his first Rose Garden address since becoming US president, Joe Biden last week praised the passage of the $1.9trillion stimulus package known as the American Rescue Plan Act (ARPA). “It changes the paradigm,”he said. “For the first time in a long time, this bill puts working people in this nation first.”

As Americans are starting to see the stimulus money hit their accounts, exactly how true that is deserves some reflection. While in some sense the ARPA represents an ongoing shift in the country’s public policy framework, the bill itself hardly changes the country’s material paradigm, nor puts working people first.

Sure, all of the US stimulus bills have been unprecedented. However, they included one-time payments, and even some of the most important provisions of the ARPA, such as the child tax credit, will expire after just one year. They are not really long-standing policies.

But there is something else going on here. The shock of the Covid-19 pandemic prompted Washington – which has been dominated by supply-side fiscal policy ideologues for decades – to, among other things, provide generous federal unemployment insurance and give people direct cash payments. It shows the American people their government is quite capable of doing more than it has for some time.

The past four decades have been, at their core, the era of former President Ronald Reagan, who supported business deregulation, so-called trickle-down economics, tax cuts for the wealthy and social safety net austerity. This was in contrast to the previous political era, which was shaped by President Franklin D. Roosevelt, who was a champion of essentially exactly the opposite policies.

The American political era we now find ourselves in is still finding its footing. We are clearly navigating our way out of the Reagan era, but this new one, whatever it may turn out to be, offers nothing like Roosevelt’s New Deal in terms of its material support for the working class.

For example, the Roosevelt administration helped American workers get on their feet during the Great Depression by enacting a minimum wage – and one explicitly designed to be a prosperous wage, in contrast to the threshold livable wage that is the aim of the current $15 minimum-wage push – and a government jobs program.

Biden did neither of these; his team never spoke of a jobs program and abandoned the minimum-wage drive, which is still not even a prosperous wage, at the slightest sign of disagreement from a handful of Democrats in the Senate and a non-binding opinion by the Senate Parliamentarian. It obviously means he was never serious about raising the federal minimum wage in the first place.

There has not been a paradigm shift and probably won’t be, if Biden has anything to say about it. At the same time, though, the ARPA and the other stimulus bills have shown Americans that such a shift is actually possible with enough pressure.

One could even argue that the absolutely desperate situation of working-class Americans, as a result of decades of failed policy from Washington, magnified by the Covid-19 pandemic, proves that the continuation of the supply-side paradigm was and is impossible.

To be sure, there are plenty of people in Washington that understand this quite well – including members of Biden’s own political party. A new book titled ‘Lucky: How Joe Biden Barely Won the Presidency’ by Jonathan Allen and Amie Parnes, however, details how little the Democratic Party establishment is willing to accept change.

According to Allen and Parnes’ account, “Many unnerved Democratic establishment centrists weren’t sure what they would do if it came down to [former President Donald] Trump and [Senator Bernie] Sanders in a general election. Founded or not, their fears of losing their party to socialism competed with their fears of Trump winning a second term.”

Sanders, the leader of the party’s progressive wing, who nearly won the party’s presidential nomination in 2020, is not a socialist. He does not support proletarian revolution, nor is he looking to in any way fundamentally change class relations in the country.

At his most extreme, he supports healthcare for all, education for all, a “living wage,” and a Green New Deal. And, apparently, the establishment of the Democatic Party, which virtually hand-picked Biden to lead their ticket, sees these policies as as much of a threat as someone they described as destroying the “soul of the nation,” i.e., Donald Trump.

And speaking of Trump, let’s keep in mind that he signed the first stimulus bills and obviously deserves at least some credit for the broader political shift taking place. Jacobin’s Seth Ackerman actually wrote a bombshell piece on this a few days ago, noting, “The closest historical parallel to Biden’s ARPA isn’t Roosevelt’s Fair Labor Standards Act or his Old Age Insurance plan, or Lyndon Johnson’s Job Corps or Medicaid. … The closest historical parallel to the Biden-Schumer-Pelosi plan is the Trump-McConnell-Pelosi COVID package of 2020, also known as the CARES Act.”

And while the ARPA lifts more people out of poverty, he adds, “The flip side of the Biden plan’s greater focus on children is a lesser focus on adults. The Biden-Schumer-Pelosi plan lifts 6 million and 780,000 working-age and elderly Americans out of poverty, respectively, reducing their respective poverty rates by 3 and 1.5 percentage points. The equivalent numbers for the Trump-McConnell-Pelosi CARES Act were 7 million and 1.3 million  working-age and elderly Americans, amounting to 3.6 and 2.6 percentage points, respectively.”

Yes, Biden scored an important political win with the passage of the ARPA, but this is not a paradigm shift that will address the systemic inequality in American society. It’s a band-aid on a gaping wound, and one set to peel away anyway. The working class is by no means first now, especially as the country’s oligarchs rake in record profits while millions are on the brink; however, the stimulus bills – all of them – show that something more is possible in the future.