The American republic is in dire peril, new book warns 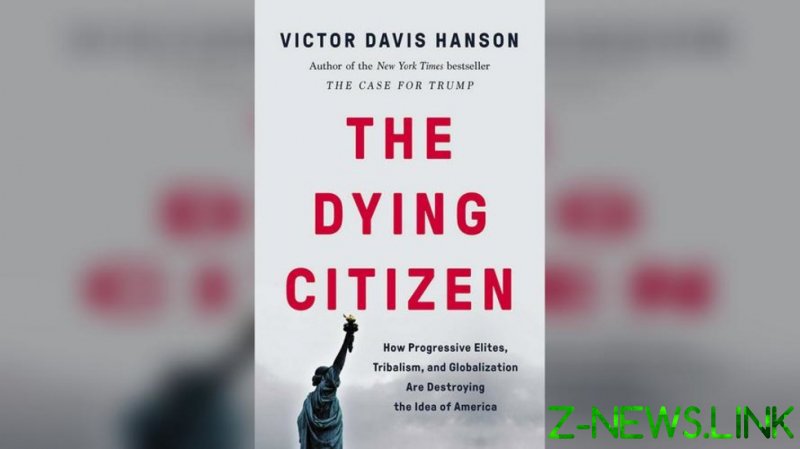 Hanson is one of America’s most renowned and respected historians. He is also an incisive political commentator and regular on US cable networks. His most recent project has been his polemic book, ‘The Dying Citizen’, which was released last month in the US and has just gone on sale here in the UK.

The overarching premise of the book is that the kind of citizenship Americans have enjoyed for the past century is slowly being eroded from within. The villains of the piece are a conglomerate of nefarious forces, which are often intertwined. They include the “unelected,” the “globalists,” and what Hanson calls “evolutionaries.”

Hanson believes the American system is the nearest the world has to an ideal model, and therefore must be protected. Indeed, at the outset, he notes that today only “little more than half of the world’s seven billion people are citizens of fully constitutional governments enjoying constitutionally protected freedom.”

Hanson began his academic career as a classicist and he is able to skillfully weave historical events from the ancient world into the narrative, while explaining why they remain relevant today. Indeed, he rarely misses the opportunity to compare the mistakes made in Ancient Greece and the Roman Empire to what has been happening in the US over the past few decades.

Hanson argues that one of the principal reasons citizens’ rights are under attack is the decline of the American middle-class. He claims that the middle-class is riven with debt and self-doubt, and the result is a polarised society of “masters,” who live gilded lives, and “peasants,” who are increasingly forced to accept their lot. He points to his native state of California as the worst example of this new society. Indeed, one only has to take a look at Los Angeles, where the wealthy live in gated communities and the poor in areas that resemble the Third World, for proof that Hanson has a valid point.

According to Hanson, open borders have also diluted citizenship, as the role of the “resident” has become increasingly conflated with the rights of the “citizen.” He notes, however, that lax borders were, prior to Donald Trump at least, supported by both Republicans and Democrats, albeit for different reasons. Hanson notes that “in America, quiet revolutions occur most often when both the right and left collude in a tacit agreement to change the system for their own particular interests.” Big business got cheap labour; the left got more voters.

Hanson is equally contemptuous of how migrants are treated once they arrive in the US. He contends that the current obsession with identity politics results in migrants not assimilating; instead, they are encouraged to celebrate their own “tribal identities.” A fractured society, as we see in the US today, has been the inevitable result. I get the impression Hanson longs for the day when all US citizens, regardless of colour, creed, or religion, see themselves solely as Americans, and not through the prism of race or language. I believe this to be a noble ideal, although I suspect it is somewhat utopian, especially in the current climate.

So, who is to blame for this sorry state of affairs?

Hanson first takes aim at the “unelected,” and by that he means what Trump called the “deep state.” He argues that the “unelected,” who are often free from public scrutiny and out of sight, are either used for political purposes, or themselves have political agendas. He cites the Inland Revenue Service’s (IRS), which in effect shut down the Tea Party movement a decade ago, as a prime example. Others Hanson refers to as the shady “unelected” include the FBI and the CIA, which hounded Trump for years and propagated the “Russia hoax.”

Then there are the “evolutionaries,” as Hanson calls them, who want to rewrite, or indeed undermine, the US Constitution. He cites Barack Obama, who wants to alter the Electoral College by making Washington, DC a state in its own right, as well as liberal Puerto Rico. The Constitution, it seems, is under almost permanent attack from the “evolutionaries.” Indeed, whether it is the Supreme Court, which the Democrats want to expand, the abolition of the right to bear arms, free speech, or the elimination of the Senate filibuster… it seems never ending, and it is all coming from one side.

Finally, Hanson targets the “globalists,” who he describes as being “like the royal families of Europe before World War I, incestuously related and essentially more akin to each other than to their constituents.” These “privileged utopians,” he argues, put the interests of the world – or more often than not, China – before the interests of their own country. He cites Michael Bloomberg, who censured his own reporters on Bloomberg News for criticising the Chinese Communist Party, and Bill Gates, as just two examples.

Hanson argues that “globalists” generally view themselves as citizens of the world. Moreover, he claims they are protected by their wealth from the harmful policies they promote. For example, it is the working and middle classes who suffer because of the expensive environmental schemes pushed by the “globalists,” and it is the wages of working people that is driven down by the never-ending influx of cheap foreign labour. The “globalists” just reap the benefits.

Hanson clearly laments the defeat of Trump last year, as he viewed him as a bulwark against the dilution of American citizenship. He also does not have much faith in the current administration, which he perceives as part of the problem, and certainly not the cure.

On the whole, I found Hanson’s arguments compelling, but, at the same time, somewhat depressing. I found myself asking why a great nation is determined to kill itself by a thousand cuts? However, I suppose I could apply Hanson’s thesis to much of the Western world, which also seems hell-bent on committing cultural and economic suicide.

So, in conclusion, does Hanson think there is any way America can save itself? Well, yes, but only if a figure with the stature of Trump emerges in the near future. He concludes by asserting that those who are determined to preserve citizenship must continue to fight because “the stakes are no less than preservation of the American republic itself.”

And as a postscript, maybe the fightback Hanson so desires began this week with the election of Republican Glenn Youngkin in Virginia, and the rejection by Minneapolitans of a proposal to defund the police. So perhaps there is a glimmer of hope after all.