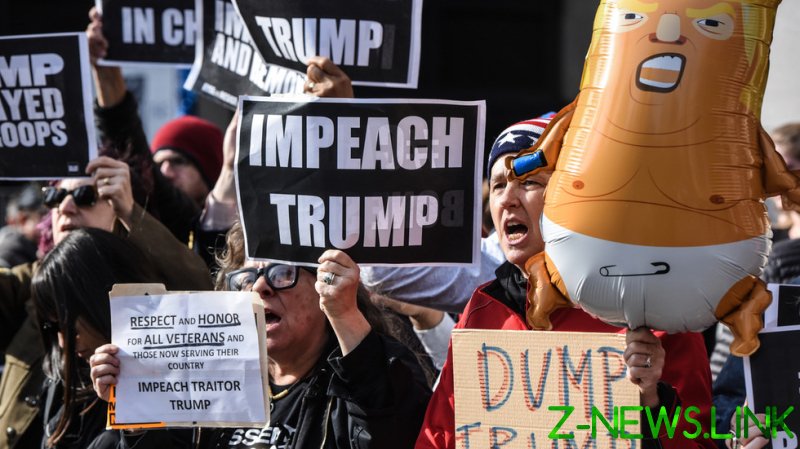 Yet this same establishment calls half the population of the US conspiratorial, delusional, and terroristic, even as it parades a lunatic’s version of events during a second unfounded, evidence-free impeachment trial of former President Donald J. Trump, and as it continues lamentations over the supposed malignancy of his presidency, weeks after it has ended.

At this point, it would be a misdiagnosis to call this illness Trump Derangement Syndrome. The idée fixe persists unabated, even in the absence of its favorite bogey, and extends well beyond any reasonable obsession with Trump himself. This syndrome, whatever it is, appears to be resistant to treatment. The ministrations of political outsiders have only left the patient with a firmer ideational conviction. Electoral engineering and repeated political exorcisms have apparently been to no avail.

This illness has affected every element of the broad political left, the political and corporate establishment, and the mainstream media. Unsurprisingly, the nation’s foreign policy “experts” remain in its thrall. Like Jonathan Kirshner, political science and international professor at Boston College, they display its symptomology without remission.

In an article titled Gone But Not Forgotten: Trump’s Long Shadow and the End of American Credibility, Kirshner exhibits the signs of the recalcitrant derangement with a fact-free, hyperbolic prognosis of US foreign policy in the wake of the Trump presidency. Like others bewitched by him, Kirshner repeats the tired shibboleths associated with hallucinatory Trump repudiation: he cozied up with dictators, scorned long-term allies, and represents “a deeply regrettable, and in many ways embarrassing, interlude” in American international relations.

The patient refers to Trump’s management of North Korean leader Kim Jong-un, and alludes to Trump’s most unreasonable demand that NATO partners pay their fair share of dues to the European peace-keeping organization that’s waning in importance. Yet evidence of the widespread “anarchy” caused by Trump is never given–no doubt because it doesn’t exist.

Kirshner exhibits the typical apriorism expected from the afflicted. Trump is guilty–of something, anything–in advance. The point of the exercise is to look for crimes committed by the presumed villain, even as the language for conviction must remain forever nebulous and abstract, as it does in this piece of feigned objectivity.

Somewhat off-topic for a commentator on foreign policy, Kirshner immediately excoriates Trump’s handling of “a pandemic that killed well more than a quarter of a million of the people under his charge.” Kirshner’s guilty verdict is meted out without evidence, and despite the fact that the death rate in the US is broadly on par with that of Europe and elsewhere.

It’s not as if Italy has fared any better, or that Sweden, which eschewed draconian lockdown laws, did any worse than Italy or France. But carrying on about Trump’s supposedly disastrous pandemic response measures is a requisite symptom of the establishment’s disorder, and Kirshner must display it like all the others. Never mind that, soon after taking office, Biden stated that there was nothing he could do to stem the spread of the virus.

As Kirshner sees it, one of Trump’s most egregious transgressions was the withdrawal from the Trans-Pacific Partnership (TPP) during the first week of his presidency. No mention is made of the fact that no one really knew what was in the deal. Never mind that, like NAFTA, it would likely cost more Americans their jobs, jobs probably shipped to China, where wage slaves work under penal colony conditions. And never mind that it would likely gut environmental regulations to please China.

“America first” has been the most maligned and misrepresented element of the Trump doctrine, and Kirshner’s declamation is no exception. Like other detractors, he refuses to acknowledge what Trump meant by the phrase: the interests of the majority of Americans should come before all else when making any political decision, not that America should become a selfish, dominating player on the world stage. From the standpoint of the economic and political oligarchy, who stood to lose the most by it, “America first” was unconscionable, and remains impossible to excise from national and international consciousness.

Kirshner barely acknowledges the fact that the Trump doctrine follows from a particular brand of populist American nationalism, including a foreign policy stemming from 19th-century Republican politics. Those who have subscribed to this political position have been traditionally non-interventionist, while demanding that a premium be laid on national self-determination, the protection of national sovereignty via strong borders, and the promotion of national self-interest over international or “globalist” entanglements. Instead, Kirshner misrepresents “America first” by surreptitiously associating it with fascism and Nazism.

No mention is made of the fact that, of the past five presidents, Trump was the only one not to begin a new war, and the only one not to extend the American military presence throughout the world. Instead, Kirshner gives away his hand by mourning that the US may “soon simply be out of the great-power game altogether.” This admission signals Kirshner’s allegiance to the neocon military establishment, and practically disqualifies him as an interlocutor supposedly concerned with international order and stability. It’s as if George W. Bush’s unprovoked and disastrous invasions of Afghanistan and Iraq have been entirely forgotten and forgiven, while Trump’s partially flouted attempts to withdraw troops from the Middle East and Afghanistan are the real international crimes.

Yet the biggest specter haunting Kirshner’s storyline is “the significant possibility of a large role for Trumpism” in the future, regardless of whether or not Trump himself continues to play a role in national politics. This is the crux of the matter, and the real problem Kirshner sees. How can the US be a reliable international partner while Trumpism persists? Kirshner’s real concern is that Trump’s policies were actually popular, and that Trumpism thus cannot instantly be extirpated from the national identity.

This fear of Trumpism haunts the entire political establishment. It explains the second impeachment trial, the calls for re-education, and the characterization of Trump supporters as “terrorists” and “the enemy within.”  It is this new leftist McCarthyism, and not Trumpism, that really afflicts the country. And it is this which makes the US an unreliable player on the international stage. For how can the US act as a single nation when the entire establishment suffers from schizophrenia?