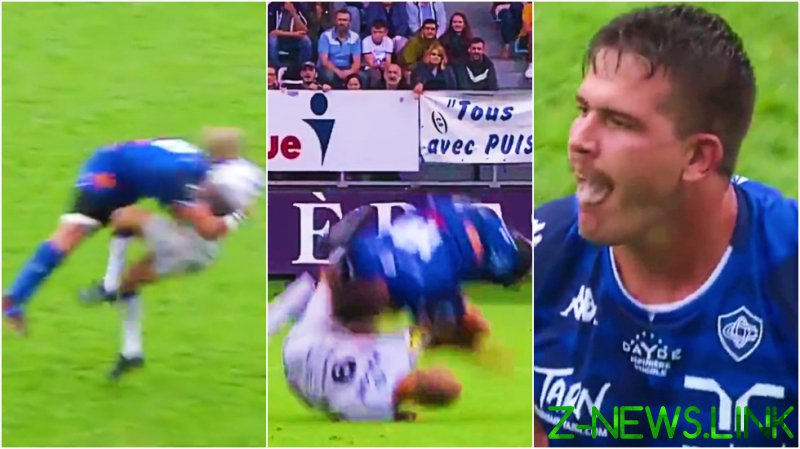 Pieterse, who plays as a lock for French side Castres, is sure to face the wrath of rugby’s disciplinary bodies for the rash challenge which occurred in a French Top 14 match against Bordeaux.

The 23-year-old former Bulls player badly mistimed a tackle on opposition scrum-half Maxime Lucu as he attempted a clearance kick from inside his own half, crashing into the unfortunate Frenchman with an extremely late and illegal tackle which left Lucu prone on the turf and prompted a mini scuffle on the pitch.

It wasn’t just the Bordeaux players who were aggrieved. Referee Romain Poite showed Pieterse – who had been in the game for just 13 minutes – a ‘carton rouge’, or red card, once he rose from the pile of bodies on the ground.

Rugby rules state that a player can only be tackled when in the possession of the ball while also mandating that defenders make an attempt to ‘wrap’ their arms around their opponent to prevent an illegal shoulder barge. It is also illegal to tackle a player while he isn’t on his feet.

It appears that all three of these rules were disregarded by Pieterse.

The player will almost certainly be subject to a multiple week ban for the horror challenge – with Poite reminding players not to dole out their own justice on the pitch as furious Bordeaux players continued to remonstrate while Pieterse solemnly walked from the pitch.

Lucu, no doubt nursing a few bumps and bruises, was also substituted after the bone-crunching tackle.

To add insult to quite literal injury, Castres paid little heed to their one-man disadvantage and leveled the game late on to emerge with a 23-23 draw.

And as you might expect, Pieterse’s illegal hit caused quite a stir online.

“That’s not a tackle, that’s attempted murder,” wrote one fan in reaction to the clip.

“Last time I seen a move like that was in the WWE,” added another, while a third attempted to break down the sheer list of rules that were broken in the single tackle.

“Wow. No real wrap; leaves his feet to jump into a player off his feet/in a vulnerable position; high and late.

“That’s not an attempt at contest, it’s a deliberate attempt to injure another player. Long, long ban coming up,” they said.