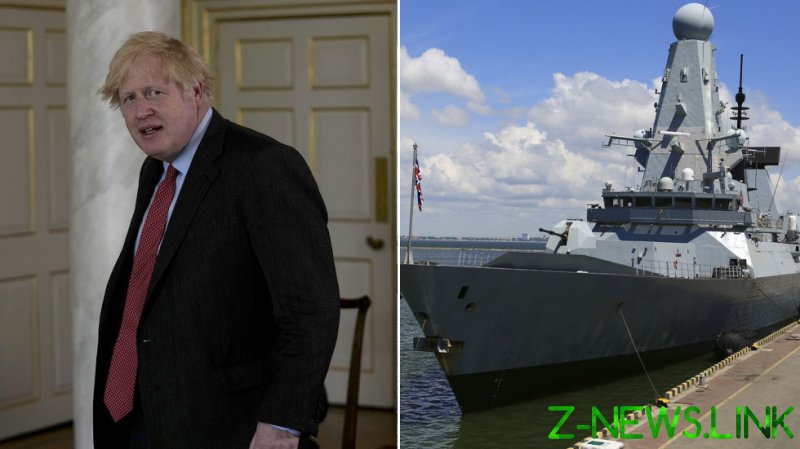 Fortunately, the British ship passed through and nobody was hurt. At least not yet. Britain’s post-Brexit global strategy, it seems, is both puzzling and worrying, driving potential conflicts not only in the Black Sea, but with its plans to needle China as well.

The Russian and British governments’ different stances over who the waters belong to are well-known. Russia maintains that its 2014 absorption of Crimea was legal, while Ukraine and its Western patrons do not. However, this dispute is not the driving factor behind this particular incident, despite what the colorful British Prime Minister and Tory Party leader Boris ‘BoJo’ Johnson is claiming, complete with mock-Churchillian references to the Russian “bear.”

Instead, the nature of this underlying dispute was entirely clear to all parties involved. On top of this, it is equally obvious that sending a heavily armed British vessel on a jaunt in these waters could not possibly help resolve the underlying problems, only make them worse.

Therefore, the real question is what all of this was supposed to be really about. For Russia, the answer is quite simple. Its response to what it saw as a British incursion was a straightforward demonstration of strength – with nothing particularly surprising about it. You provoke us, we deter you. It was a classic power play deployed by states that can afford an overwhelming display – old as the hills, or the waves.

The only unique development are renewed calls on the West from Moscow to finally accept that the country is no longer the weakened state it was in the 1990s. While combative, it is, in principle, mostly true. From a historian’s point of view, that era was an anomaly that was always likely to make way for a Russian re-assertion, sooner or later. Much of the current tension between the West and Russia is due to what was once predictable having become imminently true. One could say that the West suffers from nineties nostalgia, while Russia has moved on, and its assertive conduct has taken outside observers by surprise.

In an ironic reversal of stereotypes, Britain’s behavior is much harder to explain, at least in rational terms. It is, as the real Winston Churchill once said of Soviet Russia after WWII, a bit of a riddle wrapped in a mystery inside an enigma.

The official British line is flimsy. Risking a severe clash with Russia – a major military power with a recent record of readiness – and doing so far from home just to make a perfectly superfluous point about Britain’s view of Crimea’s status, seems strange. More so is the fact that the whole world, including Russia, already knows what it thinks, and was hardly in need of a demonstration. Less persuasive still is the insistence, in essence, that an Englishman has the right to float about in any waters he pleases. That seems odd, even by current Tory, post-Brexit standards.

Was it a clumsy attempt to disrupt smart, if timid, German and French attempts to finally increase dialogue with Russia? If only Britain had not left the EU in a suicidally short-sighted fit of national foot-stomping, it might have had subtler means to torpedo sensible initiatives from Berlin and Paris, as British observers have – possibly ruefully – pointed out.

However, the very unusual presence of multiple media observers on HMS Defender points to a more propagandistic agenda for, perhaps, mostly domestic consumption. But in that case, what was the intended message?  Could it be the same as the curiously dystopian ‘Great Britain, Great Nation’ anthem that went viral ahead of a new day of patriotic celebrations being introduced in the country?

Is it all part of the same bombastic and bumbling attempt to distract from self-inflicted international isolation, Tory incompetence and corruption, and, last but not least, real threats to the unity of Great Britain? It might look to some like right-wing jingoism in an age of diminished expectations.

Whatever the causes, there is something most observers seem to have overlooked. If the British motivation in risking a major incident with a potentially much worse outcome than has actually occurred was to stage a show, then even that staging has been badly mismanaged. The worst failure in that area has been the UK’s denial that this very incident happened in the first place.

Denying something so eminently provable is always a bad idea. Especially having first made sure media are close by to provide additional evidence, it makes for a curious approach to dominating the narrative. ‘Orwellian’, possibly, but as executed by BoJo, not Big Brother.

And yet, another odd point in a bizarre story, many Western observers could not help themselves but believe the British version. For them, the relevant logic seems to be that if Russia and a Western power say opposite things, then it simply must be Russia that is wrong or even lying. But as it turned out, the Russian account was factual, while the British spin was – to say the very, very least – highly misleading.

The incident is a telling one. We live in a world of information wars – and everyone is taking part. For anyone laying a claim to independence of mind or to possess expertise, it is not “relativism” or “whataboutism” but a basic requirement to at long last recognize this fact and say goodbye to the illusions of the new Cold War.

If Russia and the West differ, you still need to use your brain to find out who’s lying and who’s telling the truth. And yes – every single time.