Home / WORLD / That cheeky blighter President Biden says the Queen’s like his mum – he’s way slower than she is!

That cheeky blighter President Biden says the Queen’s like his mum – he’s way slower than she is! 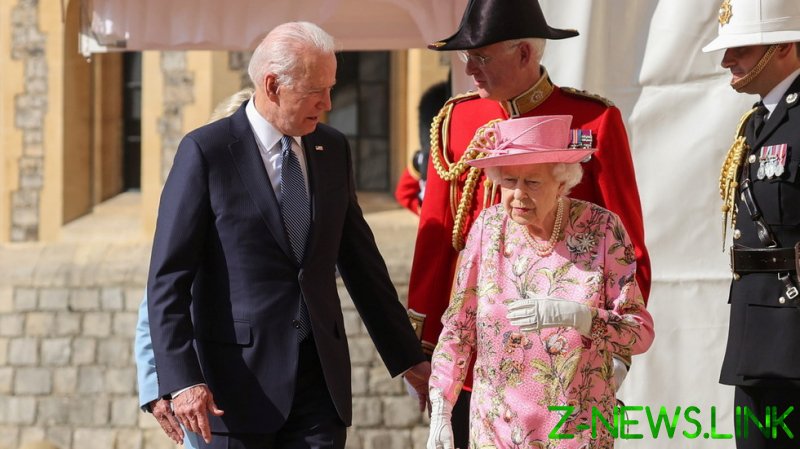 Aww bless. It’s nice to see the old folk enjoying each other’s company. It’s been a tough 18 months or so, what with bloody Covid-19 and lockdowns, care home and family visits curtailed to a minimum and all that.

Plus Elizabeth Windsor has had to deal with all the fuss caused by her ginger-haired grandson and his stratospherically ambitious American wife lately, doing TV interviews and accusing her family of racism, plus nicking her pet name ‘Lilibet’ for their new daughter. Then there was Brexit, which seemed to take an awfully long time to actually happen.

She also, of course, lost her beloved husband Prince Philip only a few weeks ago. It would have been his 100th birthday last Thursday.

Her Majesty Queen Elizabeth II is 95 years old, she could be forgiven for wanting to kick back and take it easy. To chill out in her garden at Windsor Castle.

Plus the Sunday afternoon timing was a little tight, as she didn’t have much time to get out of her football jersey and hang up her scarf – it must, surely, be the duty of the Queen of England to watch her Three Lions play football and scream at the TV?

And England had just beaten Croatia 1-0 only a few minutes before in Euro 2020 – never mind the fact it’s actually 2021, these matches were all postponed. Let the hysteria in the press commence, England are gonna win, for sure, this time – 55 years after last winning anything. The Queen knows the more likely outcome though, she’s seen it all before.

Duty called. Keep Calm And Carry On, as the posters and T-shirts and coffee mugs say. Plus, well, our Queen is a superstar granny. Indefatigable.

Liz had a prior engagement with Joe from Scranton and his wife Jill in her garden. That’s Mr. and Mrs. Biden, a couple of the very few American tourists allowed into the UK right now due to travel restrictions. Bloody Covid-19.

Jill, 70, had earlier told reporters: “Joe and I are both looking forward to meeting the Queen. That’s an exciting part of the visit for us. We’ve looked forward to this for weeks and now it’s finally here. It’s a beautiful beginning.”

They actually met a couple of days earlier down in Cornwall, along with all the other G7 leaders. Tea at the palace would be way more intimate.

The Queen dressed up in a pretty pink frock and hat and went out to greet the president and first lady as they pulled up in their motorcade. Joe dismounted in his Ray-Ban Aviator sunglasses and went to say ‘Howdy’ – he didn’t bow though, isn’t he supposed to? That’ll be the Irishman in him.

Joe Biden is 78, the oldest man to ever sit on the American throne. And, man, he ain’t aging so well – he looks older than the Queen!

Soldiers in red jackets and bearskin hats – you know, the guardsman blokes who stand to attention outside Buckingham Palace and all that – played the American national anthem. So Joe took off his Aviator shades and went to say ‘Howdy’ to a few of them too.

‘Sleepy Joe’, as former president Donald Trump liked to call him, is known for his gaffes. But he didn’t fall over in the sunshine nor have any ‘senior moment’. Not yet, anyway. Then it was off indoors for afternoon tea. In private.

Queen Elizabeth had already met loads of sitting presidents in the almost 70 years she has sat on the throne – enough to field a football team (that’s ‘soccer’ to our American readers). As she had met 11 before Joe, a straight dozen if you count Harry Truman – whom she met when she was still only a princess. She never actually met Lyndon Baines Johnson (LBJ) though, for some reason. Oh well. She didn’t miss much.

It’s always dudes, by the way, there has yet to be a dudette elected president of the United States of America. Us Brits, though, we’ve had two female prime ministers. I’m just saying.

Tea was sipped and maybe a scone or two was consumed and then the Bidens were on their way to their next stop of their European tour – a NATO summit in Brussels on Monday, a US-EU summit on Tuesday, and a meeting with Russian President Vladimir Putin in Geneva on Wednesday.

The president and the Queen chatted about the recent G7 summit in Cornwall, plus the leaders of China and Russia.

Doddery Joe had a chat with the press before boarding Air Force One and heading off to his next stop. Although, err, he’s actually supposed to keep the conversation private.

“We had a great talk. She wanted to know what the two leaders that I – the one I’m about to meet with, ah, Mr. Putin, and she wanted to know about, she, err had, about Xi Jinping. And we had a long talk and… she was very generous.

“I don’t think she’d be insulted but – my ma – she reminded me of my mother, the look of her and, you know, just the generosity. And I said ‘Ma’am, you know, this is, err, a long time.’ And she said ‘Oh no.’ And I said ‘I wish we could stay longer, maybe we could hold the cars up and stuff.’ Anyway. She’s very gracious.”

He then had to face down a penetrating question from a member of the presidential press corps, who tend to travel with the incumbent on these overseas jollies: “What is the castle like?”

Righto. He also invited her to the White House.

Anyway. Bloody cheek. She looks more on the ball and younger than he does. See ya, Joe, happy travels.