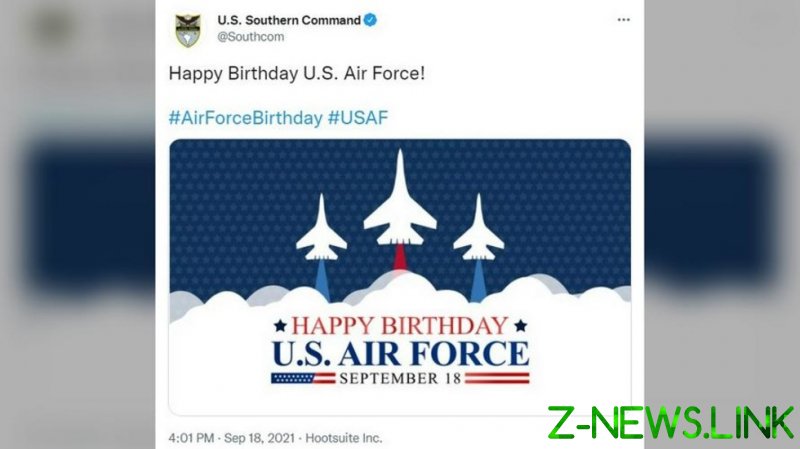 The simple graphics, posted on the occasion of the 74th birthday of the USAF, featured three top-down views of warplanes. The silhouettes don’t feature much detail, but their tail sections strongly implied that the aircraft are not from the fleet deployed by the American armed forces. Instead, they strongly resemble Sukhoi Su-27 twin-jet fighters.

The apparent gaffe was met with a strong reaction on social media that leaned heavily towards mockery.

One user suggested a simple fix to the image, replacing the silhouettes with those of F-22 Raptors.

Another said he “chooses to believe” that the aircraft in the picture were actually the Raptor’s less-successful competitor in the Advanced Tactical Fighter, proposed by Rockwell.

SOUTHCOM’s tribute to the USAF was not the only one that raised eyebrows this year. One of the accounts associated with anti-jihadist Operation Inherent Resolve sent its best wishes to the air force with a photo of two Boeing F/A-18E/F Super Hornets, which is operated by the US Navy.

Communications specialists on the US civilian side have occasionally fallen into the same trap. In April, Senator Cindy Hyde-Smith congratulated the US Air Force Reserve Command with an image featuring Russian Su-34 jets.

And in 2019, Congressman Brian Mast wished the US Navy happy birthday with a picture of the Russian Navy’s Kirov-class missile cruiser ‘Pyotr Veliky’.