Home / WORLD / ‘Thank you so much’: Mbappe signs shirt for Khabib after UFC star sees PSG bash Barcelona in a Champions League disaster for Messi

‘Thank you so much’: Mbappe signs shirt for Khabib after UFC star sees PSG bash Barcelona in a Champions League disaster for Messi 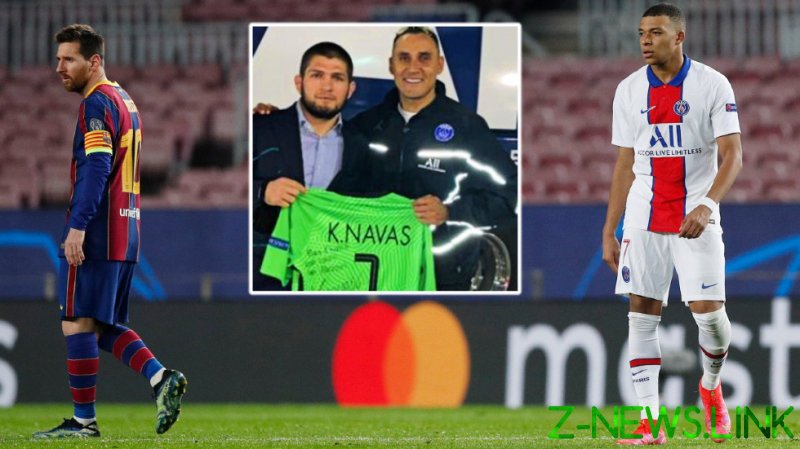 Lightweight champion Nurmagomedov first revealed that he would be attending the tantalizing round of 16 clash on the afternoon of the match, inviting his millions of fans to follow his journey on Instagram as he headed to the iconic Camp Nou in the Spanish city.

Nurmagomedov had posted a message of support for French giants Paris Saint-Germain, and he was not left disappointed as the visitors enjoyed one of the most memorable results in their history with a 4-1 trouncing including three superb goals by World Cup winner Kylian Mbappe.

The Russian legend watched from the sparsely-populated stands as Lionel Messi – a genius Mbappe is hoping to succeed as a Ballon d’Or winner – gave Barca the lead inside half an hour with an emphatic penalty.

That was as good as it got for the home side’s captain. In a mauling that carried shades of their 8-2 battering by Bayern Munich in last season’s competition, Barca had no answer to Mbappe’s speed, power and ingenuity as he scored three times in less than an hour, joined by Italy prodigy Moise Kean on the scoresheet.

With no away fans officially attending a match held behind closed doors as a result of the Covid-19 pandemic, Nurmagomedov’s footage on social media seemed to show a majority of onlookers in Barcelona masks looking understandably perturbed during their side’s comprehensive defeat.

The unbeaten fighter had one of the best views in the vast stadium as he filmed France forward Mbappe curling in his third goal in the 85th minute, potentially delivering a knockout blow to frustrated Messi and Barcelona’s hopes of reaching the quarterfinals.

22-year-old Mbappe signed a shirt for Nurmagomedov after the victory, and the Dagestani then stood alongside goalkeeper Navas next to the PSG-branded coach, holding what appeared to be another signed shirt as the stopper grinned and put an arm around his shoulder.

“Thank you so much,” Nurmagomedov captioned the image with Navas, although Paris could owe “The Eagle” some gratitude following another excellent result in his presence.

Nurmagomedov appears to be a lucky charm for the Ligue 1 champions, also watching them beat Madrid 3-0 at home in September 2019, when he met David Beckham, the former England midfielder who represented both sides before retiring.

If he was less overjoyed with the result that night, Nurmagomedov was probably politely pleased to have watched PSG all but end Madrid’s arch rivals’ hopes of going far in the competition this season.

Fans of the retired MMA powerhouse are always eager to find glimmers of hope that he will make a comeback following his announcement that he would end his fighting career following his win over Justin Gaethje last October.

Barcelona will also spend the next month or so hearing about tenuous comeback claims, as they will need to take inspiration from the spectacular one they delivered when they annihilated Paris 6-1 in the second leg in a tie between the two clubs in 2017, when they had lost the first leg 4-0.

With Mbappe in superb form and playmaker Neymar likely to be back from injury for the return leg in Paris, Nurmagomedov will already be looking forward to watching PSG in the final eight.