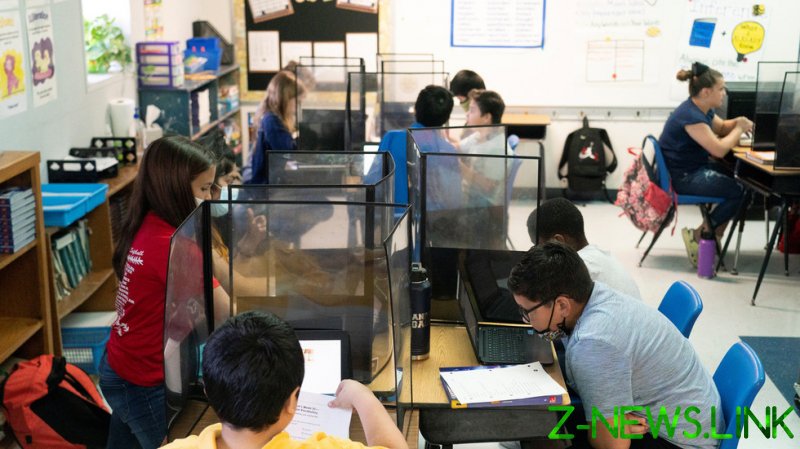 The actual cover includes a mashup of imagery, most of it not political, including a picture of the Baby Yoda character from Disney’s ‘The Mandalorian,’ and included an NFL logo.

The bits parents took issue with include a black fist with the words “I can’t breathe” – often used by BLM supporters when referencing the death of George Floyd – and a list of phrases that includes “no human is illegal,” “science is real,” and “black lives matter.”

The artwork was actually put together by eighth-graders, but Kayla Mick approved the images, which appear on the back cover of the book. Offended parents were offered a book with an alternative cover amid the complaints.

The Lewisville school district has promised a “full review” on the matter. A spokesperson for the school district, Amanda Brim, said that teachers “must remain neutral” when engaging with students on divisive subjects.

“It is our best hope that all of our teachers connect with students in a way that makes them feel safe and creates a sense of belonging in every classroom,” she said, according to Dallas News. “Having said that, we expect staff to remain neutral while engaging students in these conversations, in accordance with district policy.”

One parent who complained accused the school of “forcing” political views on students and said the cover should have included a MAGA (Make America Great Again) sticker, as well as the phrase “all lives matter,” a phrase often cited by BLM critics.

Mick has received some support, too. A petition calling on the school to defend the teacher has received over 3,700 signatures.

Stephanie Bell, a former mayoral candidate who started the petition, has accused the school of infringing on students’ freedom of speech.

“Censorship in journalism simply because you disagree with the content is not only unacceptable, it’s dangerous,” she wrote.