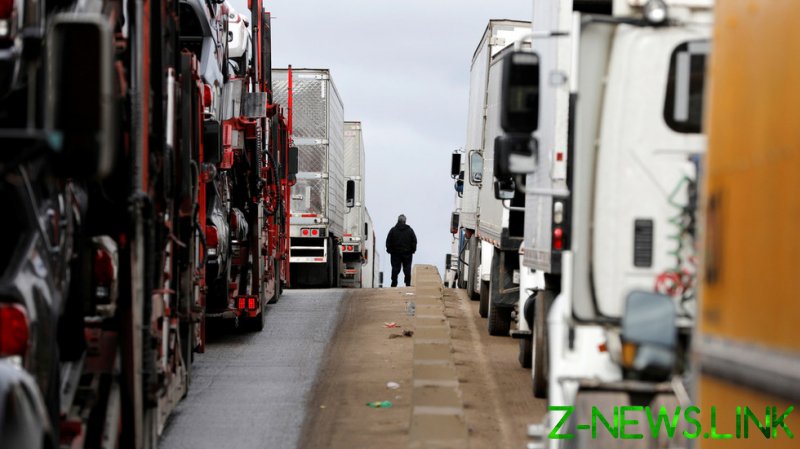 Bexar County Sheriff Javier Salazar told reporters on Thursday that his department received a call from a truckload of illegal immigrants in San Antonio that evening. Their smugglers had sealed up the refrigerated truck and blocked air holes, and the migrants feared that they would suffocate inside.

Deputies in the area noticed movement around a truck parked at a gas station, and saw a large crowd of people flee the truck and run into some nearby woods. Some 50 migrants were apprehended at the truck, while local media reported that around 150 escaped into the woods.

“It’s sub-zero temperatures here, just about, and it’s still snowing. And our concern is people are going to be very much exposed to… the elements and quite frankly, we’re worried some of these people may be in distress very, very soon here,” Salazar said.

“I think they’re in danger of freezing to death out here if they’re out here for very much longer,” he added.

He stated that the ‘coyotes,’ the smugglers transporting the migrants, likely blended in with the crowd that escaped.

Such smuggling attempts are not uncommon in Salazar’s jurisdiction. Just one week earlier, Immigration and Customs Enforcement (ICE) agents arrested one person after a man called 911 and said he was trapped in the back of a tanker truck with 80 other illegal immigrants, who were rapidly running out of air.

While former president Donald Trump’s semi-completed border wall would make crossing the border much harder for migrants on foot, those smuggled in trucks are less easily detected. The Biden administration has promised to use unspecified “technology” to reduce illegal border crossings, and to work with the government of Mexico to secure its own southern border with Guatemala. Just last month, Mexican authorities stopped a truck carrying 130 migrants from Central America.

Back inside the US, President Biden has moved to make it easier for migrants to legally enter. More than 25,000 immigrants held in Mexico under Trump’s ‘Remain in Mexico’ policy have recently been welcomed into the US, and immigration legislation proposed by Biden this week would include a pathway to citizenship for up to 11 million illegal immigrants already living in the US.