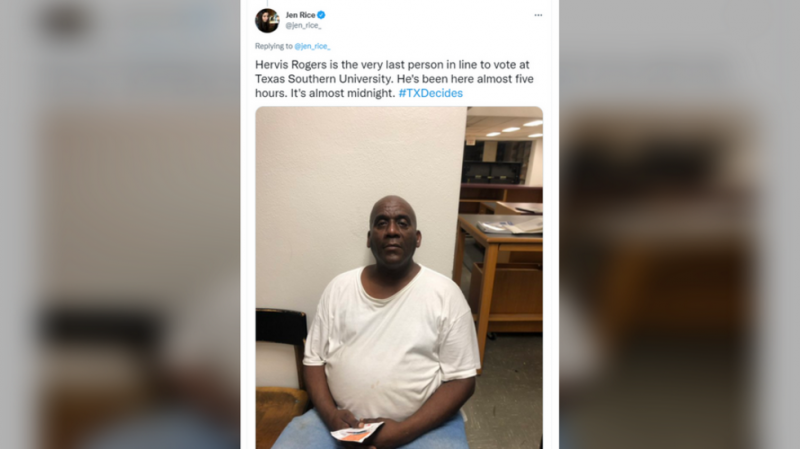 Hervis Rogers, 62, was a felon on parole at the time he voted in the November 2018 general election and the March 2020 Democratic primary, according to a two-count indictment by Texas prosecutors. His arrest set off a storm of criticism from the ACLU, anti-incarceration activists, and left-wing pundits, who claimed that it was unjust and racist, since Rogers is black.

Having a Democratic voter who went viral for his determination turn out to be a felon voting illegally is rather controversial for a party that has fought against claims of illegalities surrounding the 2020 vote. Some have argued that the prosecution of Rogers is another attempt by Republicans to disenfranchise non-white voters.

“This is a voter-suppression prosecution, pure and simple, a poster child for Jim Crow 2.0,” the Texas AFL-CIO union group said. “Unfortunately, it confirms that Texas’ shameful legacy of disenfranchisement is alive and well and desperately needs fixing.”

Rogers was hailed for waiting in line more than six hours to vote on Super Tuesday 2020, reportedly casting the last ballot at a Houston polling site after 1am local time. National media outlets such as USA Today picked up the story, quoting him as saying, “I wanted to get my vote in to voice my opinion. I wasn’t going to let anything stop me, so I waited it out.” The local NPR affiliate said he voted for Joe Biden.

Top Democrats, such as Senator Chuck Schumer (New York) and 2016 presidential candidate Hillary Clinton, also pounced on the incident to argue that the fact Rogers had to wait so long to vote was the result of GOP voter suppression.

Unfortunately, it also turned out to be an example of alleged voter fraud. Rogers was convicted of felony burglary in 1989 and 1995. He was sentenced to 25 years in prison in the latter case, then was released in 2004 with his parole scheduled to run to June 2020. That means he was still on parole when he voted in 2018 and again in March 2020, according to the indictment.

He was jailed last week, with bail set at $100,000. Voting while serving a felony sentence, including parole, is punishable in Texas by two to 20 years in prison, meaning Rogers could get a 40-year term if convicted and hit with the maximum penalty on each count with sentences running consecutively.

The Bail Project, an activist group that campaigns against cash bail, posted bond for Rogers on Saturday, securing his release while awaiting trial. Bail Project founder Robin Steinberg accused Texas Attorney General Ken Paxton of using the indictment as a “targeted message of fear” to suppress the “turnout of people of color.” The group added that Rogers believed he was eligible to vote.

The ACLU, which is aiding Rogers’ legal defense, said the prosecution shows that “even innocent mistakes in the voting process can be criminalized.”

Nicole DeBorde, a legal analyst for CNN, MSNBC, and Fox News, also represents Rogers. She said Rogers completed rehabilitation after “mistakes in his youth,” adding, “This case, for us, is about who we let the government decide to throw out like trash and who we deem worthy of the basic rights to participate in the processes we all hold dear.”

Rogers was about 36 at the time of his last conviction.

Social media users attacked the Texas AG for charging Hervis. For instance, poll analyst David Rothschild called Paxton a “shockingly bad person” who was “doing bad things to good people to score cheap political points in your voter-suppression crusade to create permanent white rule in Texas.” Author Megan Kelley Hall said Paxton deserves to go to jail, adding, “You are scum. You are a monster and a poor excuse for man. I hope you go someplace much hotter than Texas.”

Paxton responded to media coverage critical of the indictment, including a local NPR report, by saying “Hervis is a felon rightly barred from voting under Texas law … I prosecute voter fraud everywhere we find it.”

Governor Greg Abbott used the case as an example to argue that illegal voting should be a major concern. “Voter fraud is real,” he said. “It occurs mostly by mail ballots or ballot harvesting, but as seen here, it also occurs in person.”