Home / WORLD / Texas House votes to round up Democrats who fled to DC to block controversial voting bill, governor says he’ll ARREST them

Texas House votes to round up Democrats who fled to DC to block controversial voting bill, governor says he’ll ARREST them 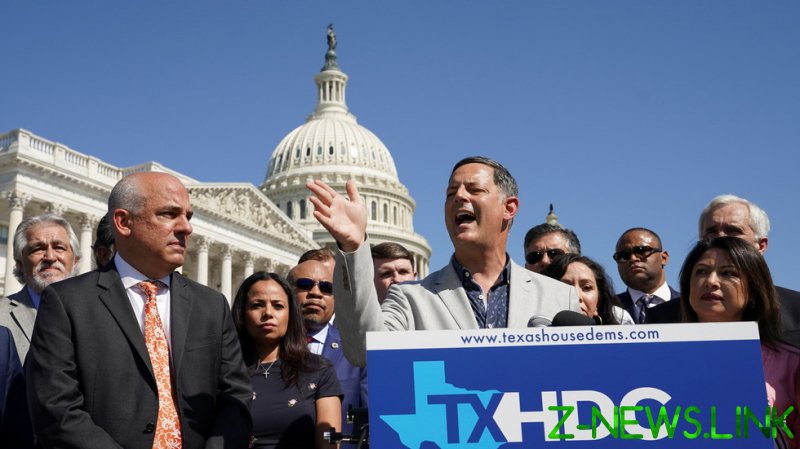 As the Republican-controlled Texas House of Representatives geared up to vote on a controversial election security bill on Monday, more than 50 Democratic lawmakers piled aboard private jets and skipped town for Washington DC. Although the Texas House is split 83-67 Republican, the absence of the Democrats meant a quorum was not reached, and business could not be conducted.

Abbott vowed on Tuesday to have the absconding lawmakers arrested on their return, and to force them into the Capitol to hold the vote.

“As soon as they come back in the state of Texas, they will be arrested. They will be cabined inside the Texas Capitol until they get their job done,” Abbott told a local TV station.

Shortly afterwards, the remaining lawmakers voted 76-4 to order the House sergeant-at-arms to send for the Democrats. Under Texas law, he or she is empowered to issue arrest warrants, if required.

Should the Democrats stay out of Texas until August 6, the special legislative session called by Abbott to pass the election bill will expire. However, Abbott told local media on Tuesday he would simply call another session next year, if he had to.

The bill itself has been described by Republicans as an “election integrity and security” bill, and by Democrats as an effort to legally enshrine “voter suppression” and make it more difficult for minorities to vote. It would require identification for voting by mail, prohibit unsolicited mail-in ballot applications, criminalize interference with election observers, and ban drive-through voting. Some or all of the measures that would be prohibited were introduced by Democratic jurisdictions last year, citing the Covid-19 pandemic.

Upon arrival in Washington on Monday, the absconding democrats urged the Biden administration to pass the ‘For the People Act,’ a piece of Democrat-sponsored legislation that would automatically enroll voters, expand mail-in voting nationally, and prohibit election officials from using certain methods to question someone’s eligibility to vote or remove a person from voting rolls. It would also prohibit “onerous voter identification requirements,” which Republicans argue are necessary to prevent fraud.

The act faces an uphill battle in a 50-50 divided Senate, however, where it needs a 60-40 majority to pass. In Texas, the Democrats will likely be unable to permanently delay the passing of the bill.

Their plan is not without precedent. In 2003, more than 50 House Democrats left the state to try to block a Republican-sponsored redistricting proposal. When the plan passed anyway, Democratic state senators then fled to New Mexico, before one of their party defected and returned to negotiate with the Republicans.