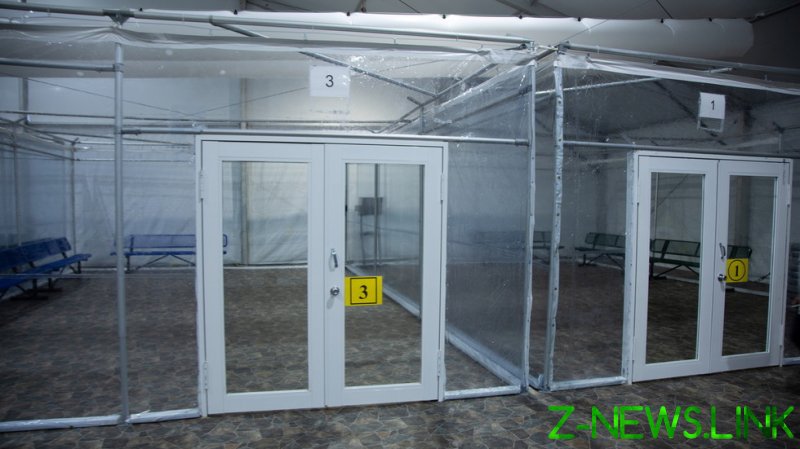 “The Biden Administration has been an abject failure when it comes to ensuring the safety of unaccompanied minors who cross our border,” Abbott said in a statement on Friday, calling conditions at the federally-run detention facilities “unacceptable and inhumane.”

From a lack of safe drinking water in one location to a Covid-19 outbreak in another, the Biden Administration has no excuse for subjecting these children to these kinds of conditions.

The governor’s office said Texas health officials were deployed to a holding center in Carrizo Springs to “investigate, identify and combat” a coronavirus outbreak at the facility, used to house minors who cross the US-Mexico border unaccompanied. Abbott offered few details about the reported Covid flare-up, including how many underage migrants had been infected.

Originally open for just a month in 2019 before it was shuttered by ex-president Donald Trump, the Carrizo Springs facility was reactivated in February to hold up to 700 children aged between 13 and 17, according to the Washington Post.

Abbott also decried conditions at a federal holding center in Midland, saying the Texas Commission of Environmental Quality had notified staff of the need to address “serious water issues” there.

“President Biden’s refusal to address the border crisis is not only enabling criminal actors like human traffickers and smugglers, but it is exposing innocent unaccompanied children to illness and potentially unsafe living conditions,” the governor continued.

The administration must act now to keep these children safe, secure our border, and end this humanitarian crisis.

The president maintains that federal agencies are acting as quickly as possible to transfer detained children out of the custody of the US Border Patrol into “safe facilities” run by the Department of Health and Human Services. However, both the Carrizo Springs and Midland locations are overseen by the HHS, the latter of which faced safety concerns almost immediately after opening.

According to the Associated Press, more than 10 percent of the Midland camp’s population tested positive for the coronavirus, with at least one child hospitalized, just four days after the center began operating.

More than 14,000 migrant youths are currently held in US custody, with some 4,500 in Border Patrol facilities and another 9,500 at the HHS-run centers. A large percentage of them, nearly 3,000, have been held beyond the three-day limit set out under federal guidelines.