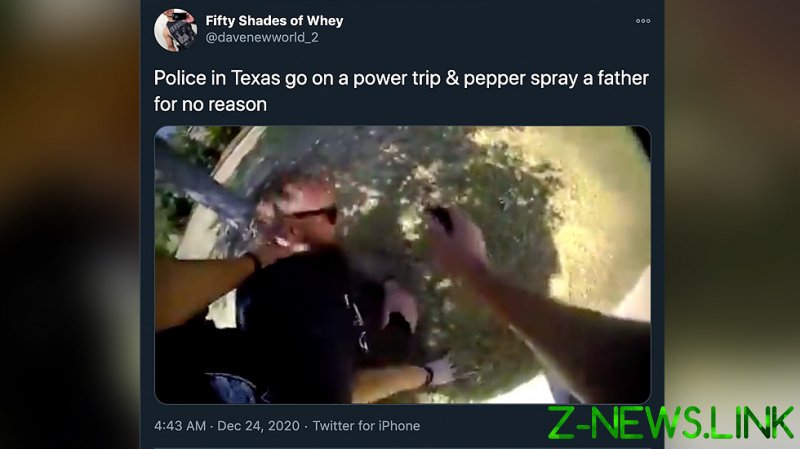 The bodycam video from back in August begins with the son, Dylan Puente, being arrested, seemingly for “suspicious” behavior in the form of rolling up his car window as one of the officers approached him.

“Why are you acting so suspicious?” the officer asks. “Because I’m scared,” replies Dylan.

“You roll your window up when I’m walking up on scene for a routine traffic stop… What does that look like to me?” the cop asks, as Dylan’s father, Marco Puente happens to drive by. He stops and starts filming the altercation.

At that point, the officer appears to call for backup and then threatens the older Puente with arrest for “blocking” what was an empty roadway with his truck.

After that, Puente senior apparently leaves the scene, but returns on foot, and continues to film his son.

Both officers approach the man, one trying to seize his phone. When he refuses to let go of it, he is grabbed in a chokehold. One of the officers then begins to prolongedly pepper-spray the held-down father in the eyes.

Following the brutal incident, Marco Puente was taken to the police station, where the officers would not let him wipe the chemical from his eyes for about half an hour, according to his lawsuit.

Keller police would not comment on the ongoing litigation. However, the department confirmed that one policeman involved was demoted from sergeant to officer in the aftermath of the altercation.