Home / Society / Terrible interiors in the style of the Soviet Union

Terrible interiors in the style of the Soviet Union 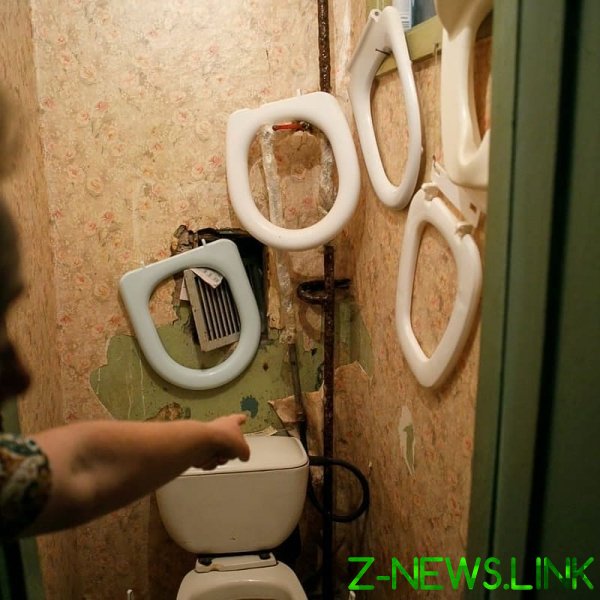 I have long wanted to write a post about such a terrible legacy of the Soviet Union, as the Soviet interior. Maybe you don’t know about it — but now a lot of people continue to live in apartments with very, shall we say, unique interiors. Some of these interiors have remained still from Soviet times, and the other part (which is worse) — this is the new “works of art”, made today in the style of “a La scoop.”

My friends periodically dropping me photographs of these interiors — I always carefully preserved in memory and periodically, the courage, the browsing. All the photos are new, taken from the Ukrainian sites for rental housing — but I have to say that in Belarus and in Russia this tin you can find not less (and sometimes more).

So in today’s post — the story of the “Soviet legacy” in the interiors of apartments with photographs. Make sure you check out the article below, write in the comments your opinion, well to friends to add do not forget) And telegram channel also subscribe.

02. So, let’s begin. In the modern interior a La scoop will definitely be a “classic attributes of the USSR” — the carpet on the wall or on the floor cushion sofa and chairs, mesh dust-collecting curtains and “section” in the wall. By the way, the photo below shows that the section remained from Soviet times, and was purchased relatively recently — for what it’s supposed to do, I’ll never know. 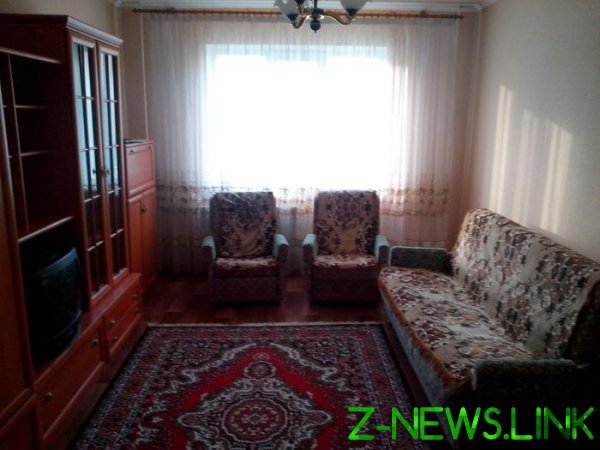 03. Here, too, quite modern interior, which, however, copies of “the best Soviet traditions” — “section” along the walls, ugly carpet on the floor, dust window blinds, Wallpapers picture. Why would they do that? Huh? 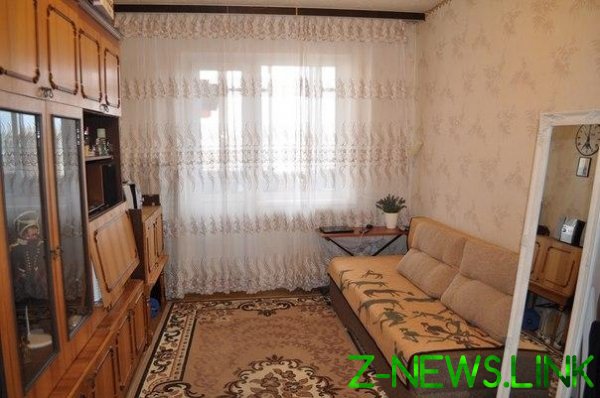 04. All “section” is a required attribute of the apartment a La the USSR, albeit modern. “Section”, usually, enormously irrational — in the panel house it occupies about a quarter of the usable area of the room (the narrow “case”) and is Packed full of anyhow than the mountains of dishes, which for years there is not removed, knick-knacks, books of the Brezhnev era, the Soviet stack of pillowcases postcards “Kerch-1981” and the magazines “Science and life” for the years 1986-89. I’m not kidding — you will be visiting someone in the house with this “section” — sneak peek in the lockers, you’ll find it. 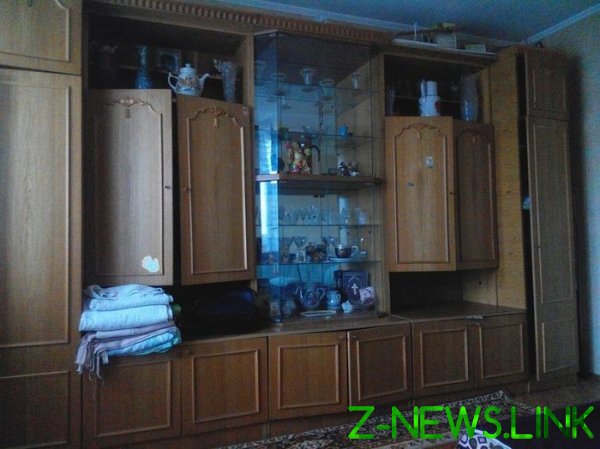 05. Here is also a great example of a room with “section” and stored things: 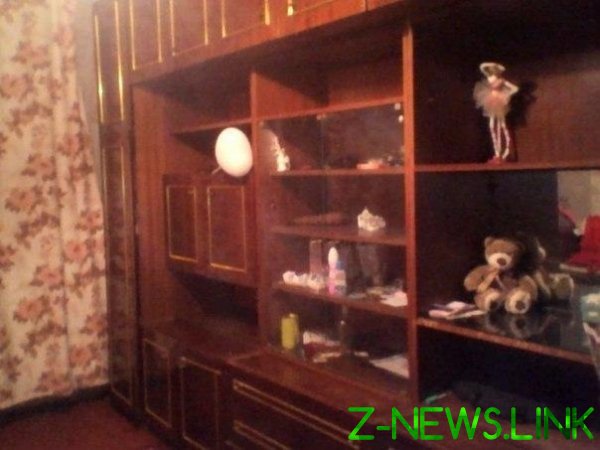 06. Or here. See, the section is clearly not Soviet, bought in 2000-ies. Why they bought it? A huge array of furniture makes the room less on the third, does not normally pass near the bed and it is completely empty. “Soviet gloss” adds a terrible petrokova chandelier and ubiquitous net curtains dust collectors. 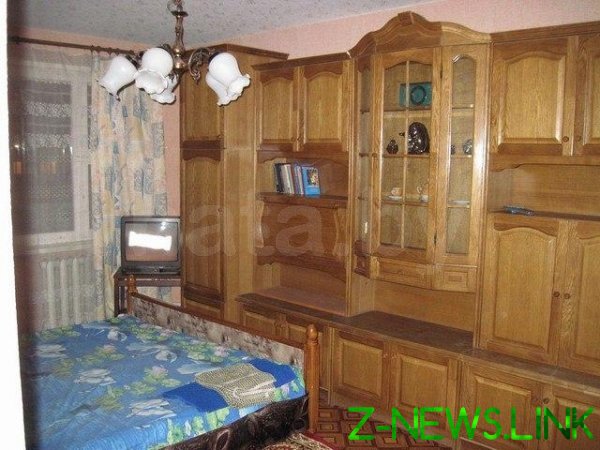 07. Another modern living in the Soviet style. The second most common Soviet attribute of furniture (after “wall”) is a polished sideboard, pictured below them for two, different caliber. At its futility sideboard can compete with the “wall” — it kept a bunch of stuff, old books that nobody reads, for decades, some soft toys, empty bottles of perfume and so on. 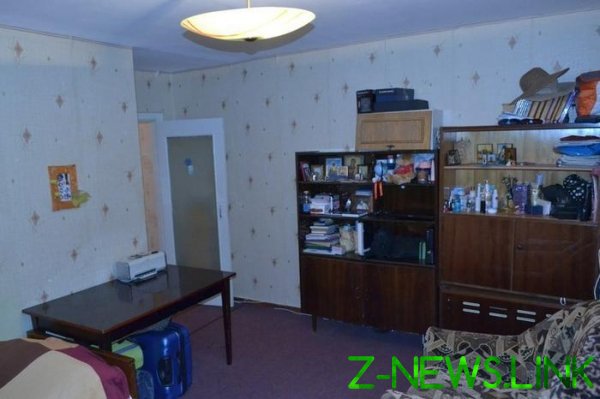 08. Also a series of “perfect”. Why in the cupboard the dishes as much as Carl? What company of soldiers they were going to feed? 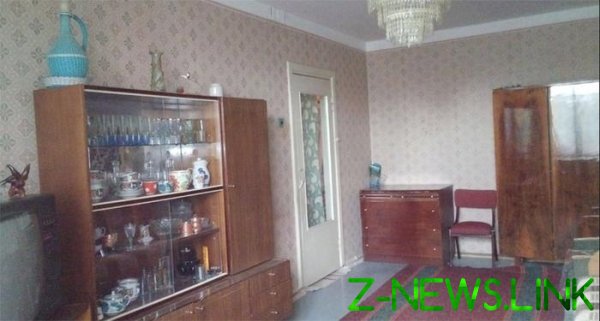 09. Sometimes I come across options living in a style that can be described as “Soviet minimalism”. This means that the landlord already got rid of most stuff, but left in the apartment some necessary minimum of furniture. Here’s a classic example of this style — no walls, no cupboard, only a couple left of some chests of drawers, wall mounted book shelf and a sofa. Note how visually the apartment breathe easier without the huge dark walls in half the room and without nasty net curtains on the window. 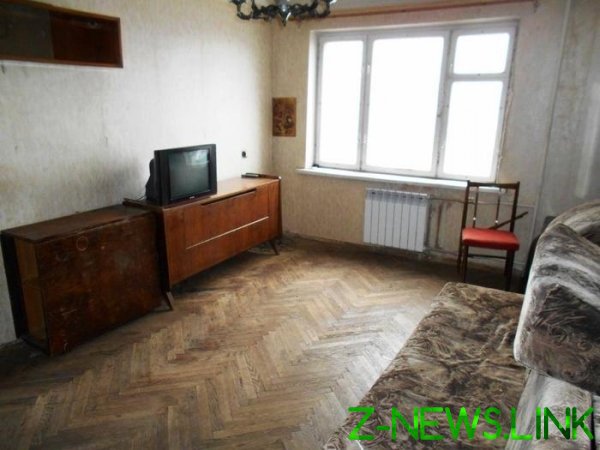 10. Another example of “Soviet retro” — leaving only a table for dwarfs, sofa and wardrobe. 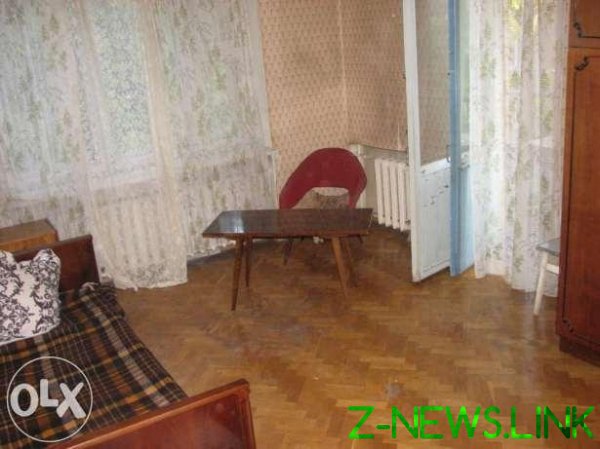 11. It’s time to look at Soviet style bedroom, here is a typical room a La the USSR — furnished it is unclear what, half the furniture you can safely throw, especially a huge chair. 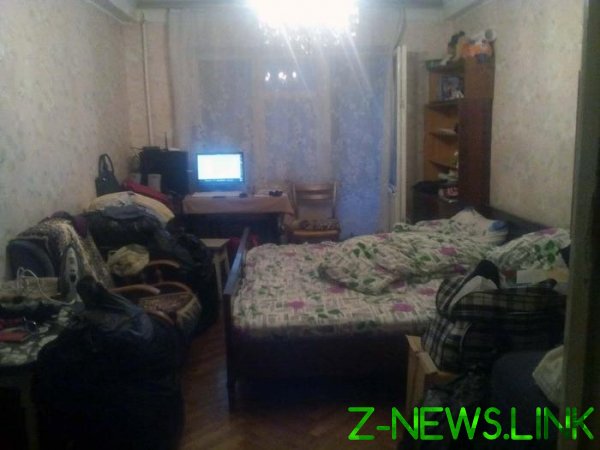 12. The biggest disaster bedrooms in the Soviet style — this is what people continue to sleep on what is not clear — instead of beds, you can see some fold out sofas, chairs and other trash. Please note that Krasno and a sofa on the photo is not the Soviet, bought after the Soviet Union “the old habit”. Why, instead of sofas, you can’t just buy a normal bed with the mattress — a mystery to me. 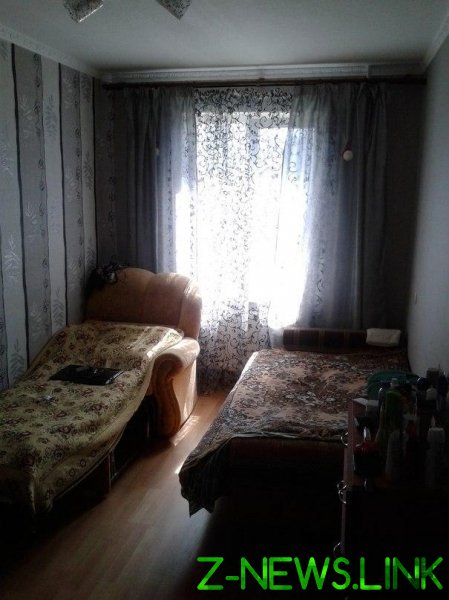 13. However, the old Soviet sofas and beds is also massively continue to be used — such as in this photo. Here by the way are collected, and other attributes of the Soviet bedrooms — huge closet, required a huge chair with a colorful Cape and the obligatory wall carpet in Oriental style. Carpet in this photo there is something strange — he stepped back a foot and I’m afraid, is going to take over the world. 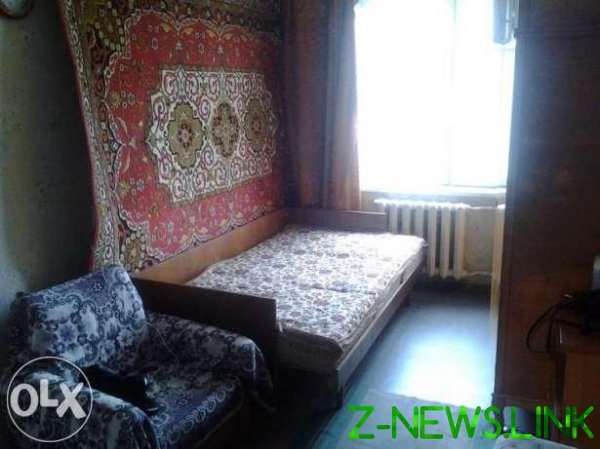 14. Even the bedroom moved the junk cupboard from the living room full of the same stuff. Somewhere under the ceiling hangs a picture, above the door nailed watch. 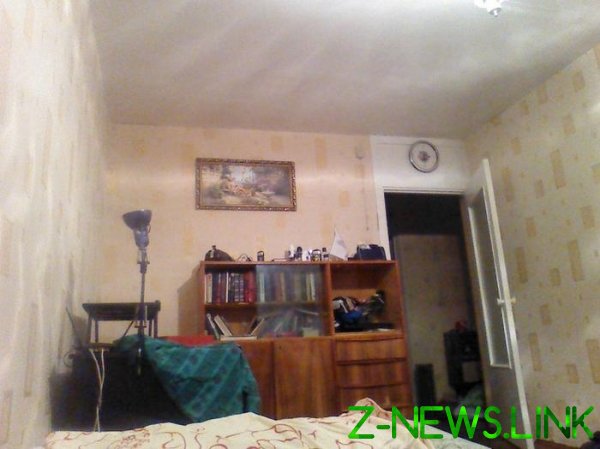 15. Another problem of bedroom “a La scoop” — some office-hotel style. Apparently, the owner of this apartment “aerobatics” bedroom interior believes the provincial Soviet hotel. Cloth, tables, Slippers hardly the tram moved a detachment of October. 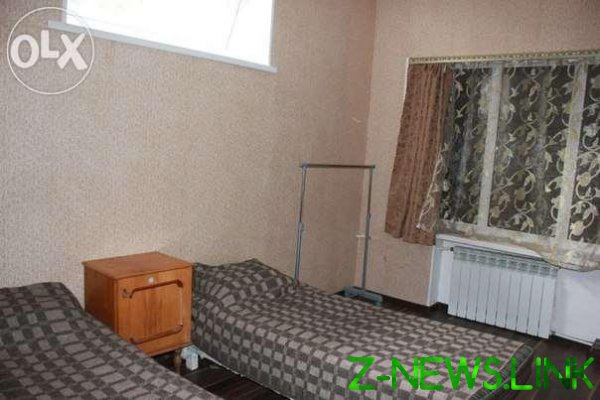 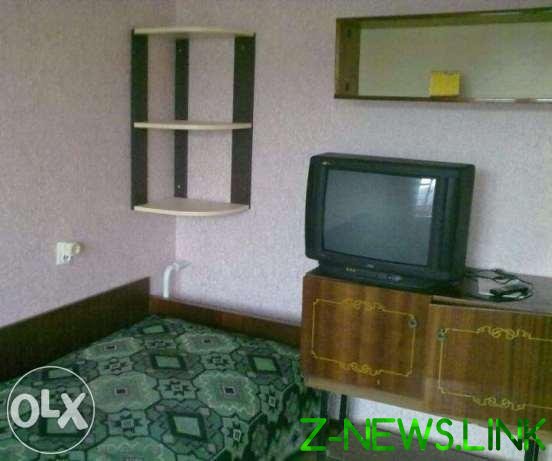 17. Now let’s look at kitchens and bathrooms. Classic cuisine “a La scoop” looks something like this — an old cupboard, Cabinet-column, plugged in the corner to the window gas stove. Please note that apartment living is not quite so rogue — new Windows inserted, the panel is also quite modern. Why not buy new furniture? 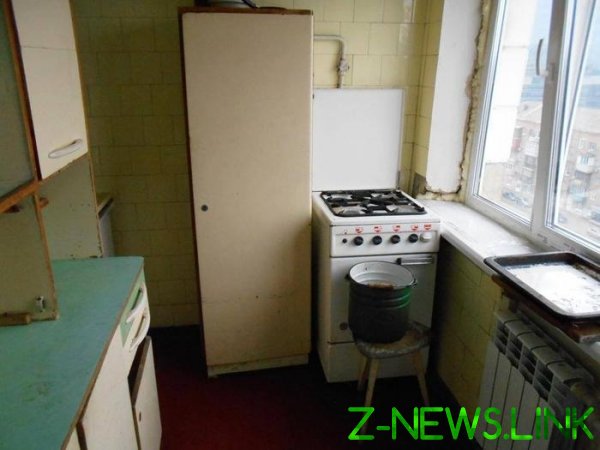 18. Here is the same kitchen from a different angle. To cut food for cooking it is proposed, apparently on the green tabletop rickety canteen, and wash the dishes — sagashite in the corner for the Cabinet box. 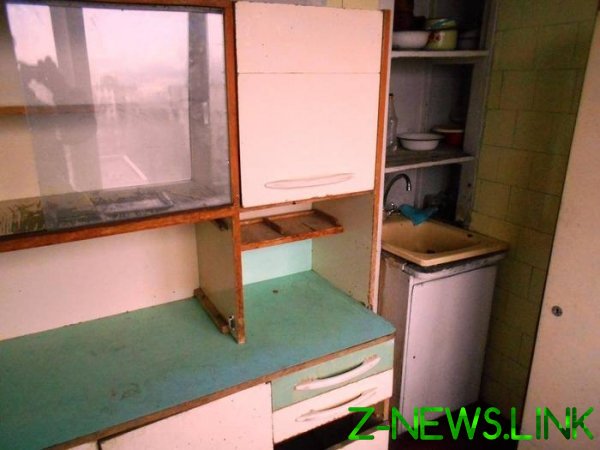 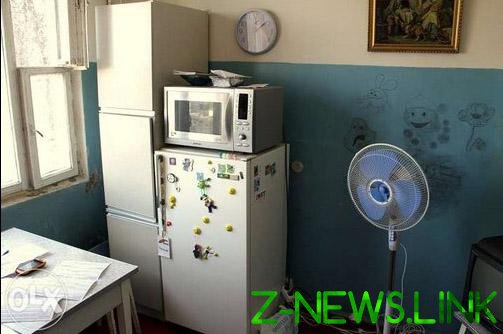 20. The hallmark of the Soviet style kitchens is the inability to handle the refrigerator — it is never normal, and it does not depend on the kitchen space. That’s a relatively big kitchen, a large part of the useful area which is a huge useless sink, and refrigerator protknut to the window, blocking the light. 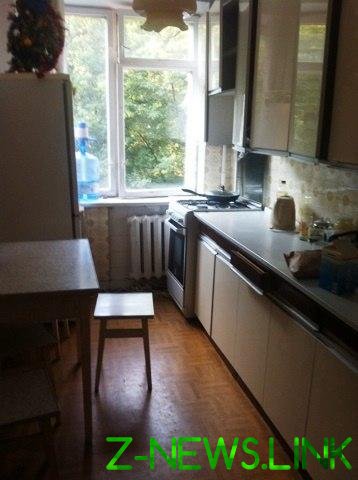 21. Igoda refrigerator is placed at the door — apparently to all stumbled at it. 22. And it happens that the refrigerator and is moved in the hallway. Why is this happening? The owners of many of these apartments grew up in communal apartments where the fridge was either unattainable luxury, or stood anywhere — often, in the room of a family (on the nights no one is stealing food). Because of this simple idea that the fridge is in General integral and an integral part of kitchen equipment, such people are completely absent. 24. Toilet. Many still retained the Soviet locker for any rusty stuff. Yet mysteriously and wildly looks the location of attachment of the paper. 25. This is also a very typical photo: 26. Sometimes the owners of these apartments make a lot of money and do the repair, but the result is still the same scoop — sideboards become frilly and ornate, curtains and acquire a complex shape, Wallpaper in flowers become even “better”. Do you know what the interesting? All these photographs were not made in the apartments of some poor grandmothers (which is understandable), and the relatively non — poor people rent housing, and this means that the owners of this property have at least one apartment+an additional source of rental income. And they carefully continue to keep and increase the here is such a style a La the USSR.

Why is this happening?