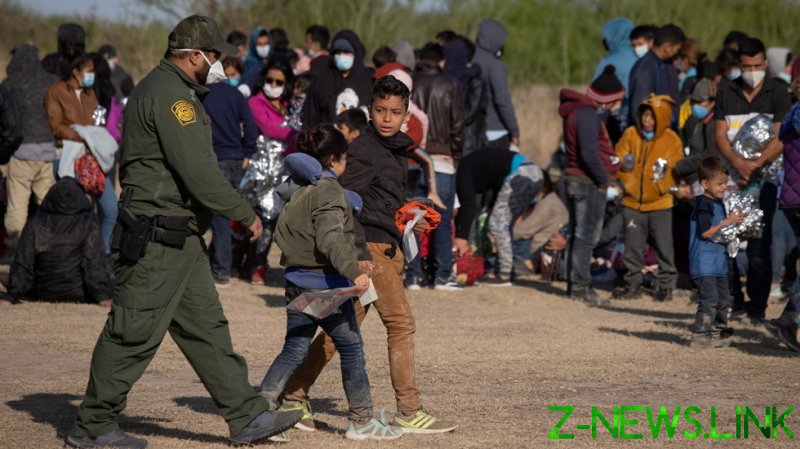 More than 15,000 unaccompanied migrant children are currently in custody at the US’ southern border with Mexico, with more than 5,000 held in temporary Customs and Border Protection (CBP) facilities deemed“unacceptable and inhumane,” in the words of Texas Governor Greg Abbott. Border crossings almost tripled in February compared to one year earlier, and are on track to hit a two-decade high, Homeland Security Secretary Alejandro Mayorkas said last week.

Photos from inside one of these facilities in Donna, Texas, reveal massive overcrowding inside makeshift tent shelters. The pictures, shared with Axios on Sunday by Rep. Henry Cuellar (D-Texas), show these plastic-lined “pods” operating at double capacity, with groups of children huddled between crude, plastic sheet dividers.

Border Patrol agents are “doing the best they can under the circumstances,” Cuellar said, but described the temporary shelters as “terrible conditions for the children.”

O’Keefe’s claims have been backed up by the New York Times, which last month described conditions within such facilities as “akin to jails.” There has so far been no mention of sexual assault in the Donna facility, but reports of sexual assault in detention centers proliferated during the Trump years.

Throughout his campaign, Biden promised a “fair and humane” border policy, and his administration insists that its host of recently opened “overflow facilities” are a world away from the “cages” former President Donald Trump kept unaccompanied minors in. Although Mayorkas has described CBP facilities as “no place for a child,” he insisted last week that federal agents would “safely receive, shelter and transfer” them into more suitable, longer-term accommodation.

Yet the kids are spending an average of 136 hours in these facilities, far beyond the legal limit of 72 hours. Moreover, getting an accurate look at the conditions they are kept in has proven difficult. Until now, no public photos from inside these facilities have been shared, journalists have been kept out, and CBP agents have reportedly been forbidden by an unofficial gag order from speaking to the media.

Asked about this apparent stonewalling, some Democrat lawmakers have defended Biden’s no-access policy. “I don’t necessarily think that it’s appropriate for journalists to be inside centers that are not permanent places for children,” Rep. Linda Sanchez (D-California) told CNN on Friday.

The current border surge came immediately after Biden reversed nearly all of Trump’s immigration policies by executive order, including a coronavirus-related policy turning back all asylum seekers at the border, and the so-called ‘Remain in Mexico’ policy that saw Central American migrants wait in Mexico until their asylum claims could be processed.

Nevertheless, the Biden administration has blamed Trump for the current crisis, with Mayorkas accusing Trump of tearing down “the orderly systems” supposedly established by the Obama administration.

Trump, meanwhile, has been scathing in his criticism of Biden. “We proudly handed the Biden Administration the most secure border in history,” he said in a statement on Sunday. “All they had to do was keep this smooth-running system on autopilot. Instead, in the span of just a few weeks, the Biden Administration has turned a national triumph into a national disaster. They are in way over their heads and taking on water fast.”

Though she worded her statement differently than Trump did, Roberta Jacobson, Biden’s border czar, admitted earlier this month that reversing Trump’s strict policies may have freed “pent up demand” from migrants to enter the US, and that Biden’s “more humane policy” may be driving more people to make the “decision” to cross the border.