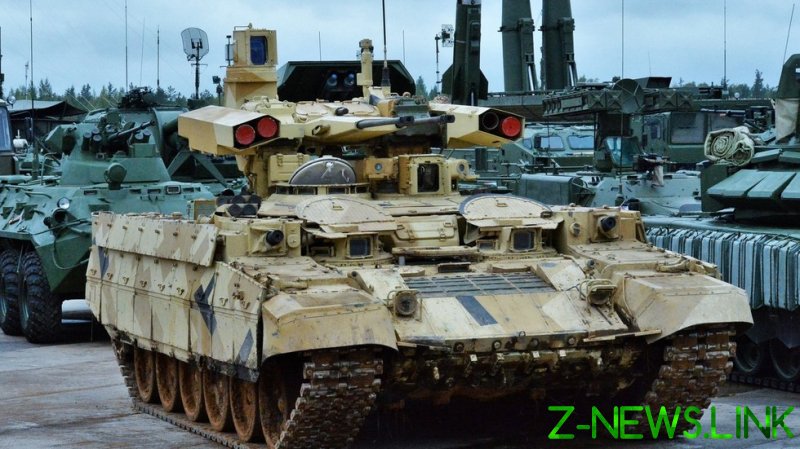 To address this concern, design engineers at UralVagonZavod developed a special tank support combat vehicle to protect tanks from enemy fighters equipped with RPGs and ATGMs.

The machine is designed to operate alongside tanks in a single tactical formation and eliminate enemy troops that pose a threat to them, as well as attack other targets.

The tank support combat vehicle, known as ‘Terminator-2’, is based on the T-72 main battle tank. This vehicle is an evolution of the first-generation BMPT Terminator.

Compared to the first iteration of the Terminator, the new vehicle requires only three people as crew.

It wasn’t easy for the Terminator to take its place in the Russian armed forces and become a mass-produced machine. The original tests started as early as 2007, but the military couldn’t decide how and in what circumstances exactly the new vehicle would be used. Besides, for a long time there was no consensus on the project among the top brass at the Russian Defense Ministry – and, to be fair, the military’s reluctance was understandable.

It was the Russian military operation in Syria that let the Terminator shine. Several of the new vehicles were sent to the combat zone, where they proved to be an extremely effective addition to the armed forces. However, they were used not as tank support combat vehicles – after all, there was no large-scale tank warfare in Syria – but as well-armored heavy infantry fighting vehicles.

The manufacturers of the Terminator studied the machine’s performance in Syria, altering its design based on the analysis.

Finally, in 2018, by order of Russia’s Minister of Defense, the tank support combat vehicle was put into service.

How Terminator-2 can be used in combat operations

Firstly, tank support vehicles can now operate in a single tactical formation with tanks. Previously, Russia’s armed forces didn’t have a support vehicle whose defense and durability were on par with a tank; the Ground Forces’ military manuals recommended moving infantry fighting vehicles (capable of providing fire support to tank units) at a distance of 100-200 meters behind the tank formation. The new support vehicle ‘partners up’ with a tank and is designed, primarily, to eliminate enemy manpower equipped with anti-tank capabilities, thus giving the tank an opportunity to focus on destroying armored targets.

Given the prevalence of portable anti-tank weapons in modern infantry units and even illegal military groups, engaging and neutralising enemy forces now requires a combination of vehicle types.

Various tactics are developed for tank support combat vehicles operating in combination with tanks: they can be used for offence and defence, in movement with anticipated enemy engagement, and independently for tactical defense and outpost support.

It’s advised to conduct joint training and team exercises for tanks and support vehicles before sending them to real combat.

Combat effectiveness of battalion tactical groups consisting of a tank battalion and a squadron of support combat vehicles is expected to increase by about 15-25%, depending on the type of combat.

The remaining issue to address is the delivery of training aid and equipment to prepare the crews of tank support vehicles, as well as SPTA (spare parts, tools and accessories) kits to carry out repairs.

Drawing on the extensive experience and research accumulated by the USSR and later Russia with respect to combat support vehicles, UralVagonZavod continues to work on the project – the new model, called AU-220M Baikal, is expected to be based on the Armata platform (with an unmanned combat module) and carry a 57-mm 2A91 automatic cannon.

The latter is a remotely controlled artillery piece that can be mounted on upgraded and advanced armored vehicles to increase their effectiveness in combat. Thanks to its  armor-piercing characteristics, the 57-mm gun (2A91) can neutralize most of the existing armored machines – it also comes with a variety of rounds useful against different types of armor-clad targets.

As for the now mass-produced Terminator-2, the vehicle is effective against a potential enemy’s fortifications, infantry carrying portable anti-tank grenade and missile launchers, tanks, IFVs, and other armored targets.