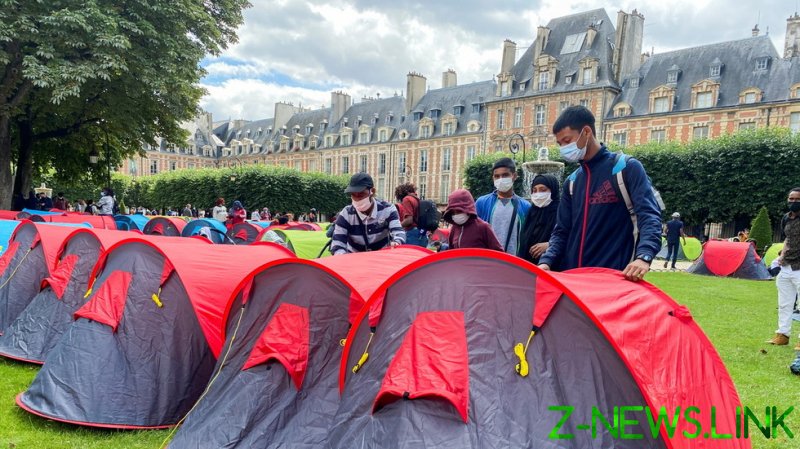 The tent camp emerged in the tourist hotspot at the heart of the French capital on Thursday. Resembling a shanty town, it appeared within minutes, hundreds of colorful tents dotting the fancy lawns of the square.

The camp was erected in an organized fashion, being divided into three sections to house families with children, single men, and unaccompanied minors respectively, RT France’s Charles Baudry reported from the scene. More than 90 unaccompanied minors were present at the event, according to one of its organizers, the Utopia 56 rights group.

“By leaving these young people on the street, France is daily violating childrens’ rights,” the group tweeted.

The protest brought together homeless people of very different backgrounds. They comprised both legal and illegal migrants, the unemployed and the working poor unable to pay Paris’ high rents despite having a job.

As the day drew to a close, Utopia 56 updated their count, reporting that 600 people were “preparing to spend one more night on the streets.”

The group argued that the French government must provide suitable accomodation for the homeless people by virtue of the law, and must mitigate an ongoing housing crisis made worse by a raging health crisis. They pointed out that more than three million French homes are currently vacant, including some 400,000 in the Île-de-France region surrounding Paris.

“The state has the power and the duty to requisition the housing of large private and public landlords in the event of a housing crisis such as the one that we have,” Utopia 56 stated.

The sudden emergence of the camp is the ninth action in a series of occupations organized by the Réquisitions collective, an initiative launched by several rights groups. During such protests, homeless people occupy various public places or vacant buildings en masse, and refuse to leave until the French state provides them with temporary accommodation.

While the authorities are legally obliged to provide an asylum seeker with accommodation in an emergency shelter or reception center as soon as they submit their application to the Office for the Protection of Refugees and Stateless Persons, many still end up on the streets. The country has experienced a chronic shortage of such shelters, and law enforcement agents repeatedly disperse the informal migrant encampments that spring up to fill the gap.

Direct action such as the ongoing protest is the only way to make the state fulfill its obligations, say the organizers. Thanks to the Réquisitions collective, nearly 3,000 people no longer live on the streets or in makeshift shelters, the groups behind the initiative said in a statement.