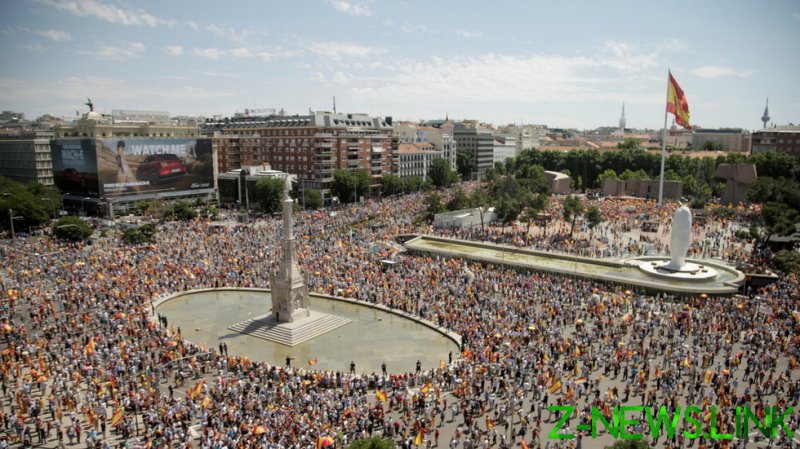 Some 25,000 people gathered in central Madrid on Sunday, according to estimates by Spain’s National Police. Local law enforcement estimated a higher figure, however, stating that at least some 126,000 demonstrators had shown up for the rally.

The activists decried government plans to grant a pardon to the Catalan separatist leaders jailed in the aftermath of the failed independence bid. Protesters carried Spanish flags and various banners, with some of them reading “Sanchez, go now” in a demand for the country’s PM Pedro Sanchez, at the helm of the center-left government, to resign.

Speaking to La Vanguardia newspaper in an interview published Sunday, Deputy PM Carmen Calvo, questioned as to when the pardons might be issued, said, “Soon. They are close. After the Supreme Court report arrives, we will immediately follow up on them. They should arrive soon at the cabinet.”

Earlier, PM Sanchez called upon the nation to show some “understanding” about the proposed measure, conceding that it might not be popular with all Spaniards.

“I understand there may be people who could have objections over this decision that the government may take, given what happened in 2017,” Sanchez stated.

The pardons have been criticized particularly harshly by right-wing politicians, who have accused the government of being too soft on the separatists and even seeking to legitimize “crime.”

“Sanchez is planning pardons to legitimize an ongoing crime … a historic error that won’t solve anything, only to keep his government from going under,” the opposition leader and head of the right-wing Popular Party, Pablo Casado, said.

Nine Catalan pro-independence leaders were sentenced in October 2019 to lengthy prison terms of between nine and 13 years, after they were found guilty of sedition for organizing the unauthorized independence referendum and issuing an extremely short-lived unilateral declaration of independence. Three other Catalan politicians were convicted of disobedience yet avoided jail time.