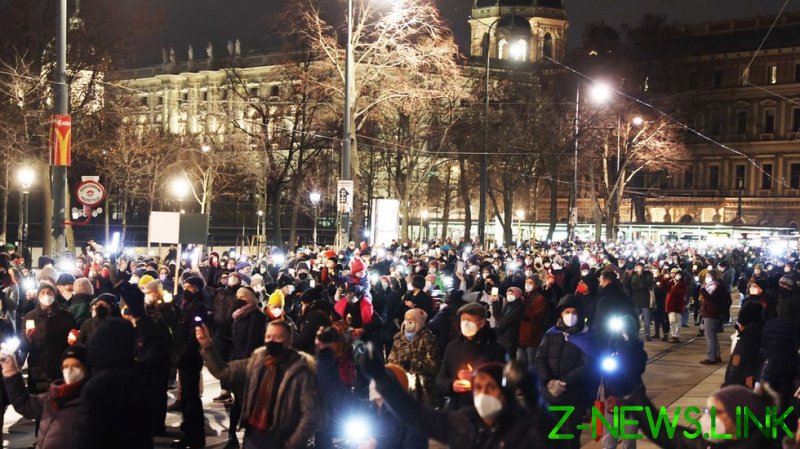 Organized under the motto #YesWeCare, the gathering began on Sunday evening in central Vienna, with people lighting thousands of candles, shining lanterns and using cell phone flashlights to commemorate more than 13,000 people who have died of Covid in Austria since the start of the pandemic. The ten-minute flash-mob was also intended to show solidarity with healthcare workers who are at the forefront of the battle against Covid. Two grassroots activists behind the event, Daniel Landau und Roman Scamoni, are quoted in Austrian media as saying they wanted to “set an example of reason, together and for each other” and make visible the attitudes of the “vast majority in the country.”

The iconic Vienna Ring Road had been closed to traffic ahead of the rally. Families with children were spotted among the participants, with the police estimating that a total of 30,000 people gathered in the Austrian capital on Sunday.

The sea of lights was somewhat different from most of the recent demonstrations held in Vienna and elsewhere in Austria in that there were very few placards or banners to be seen, and the sound of drums, which has accompanied many a rally in Vienna recently, was also conspicuously absent. Some of the participants, however, held traditional gingerbread hearts with the word “vaccinated” inscribed on them. Similar hearts had been spotted at anti-mandate and anti-lockdown rallies earlier, too, except those bore the word “unvaccinated.”

Another aspect that made Sunday’s event stand out was the fact that most participants were wearing masks. One of the organizers told the media that he had consulted doctors ahead of the rally and they had “assured him the likelihood of infection when meeting in the open air for ten minutes and with everyone wearing a mask, was close to zero.”

There were no speeches during the flash-mob on Sunday, with the event ending with a big round of applause. Authorities say the rally passed without incident, and no arrests have been reported.

The organizers insisted the event should not be construed as a “counter-demonstration” in the wake of Saturday’s anti-mandate rally in the Austrian capital and the other similar protests earlier. However, the sea of lights did seek to present a “different picture of Austria,” with Daniel Landau, one of the men behind the flash-mob, saying that he believed the “vast majority of people care about each other.”

Another key message was that there was an alternative to “violence” – an apparent reference to clashes between anti-mandate activists and police seen over the past few weeks. Sunday’s flash-mob had been backed by more than 40 organizations, including unions and religious groups.

As an apparent sign of support, Austria’s president, Alexander van der Bellen, shared a photo of a candle lit in a window of his residence on twitter. On top of that, Vienna’s public transport operator ran “yes we care” messages on tram display boards.

There were also similar candlelit flash-mobs in several other Austrian cities and towns on Sunday, with hundreds of people attending.