Tens of thousand march ‘for freedom’ in Australian cities (VIDEOS) 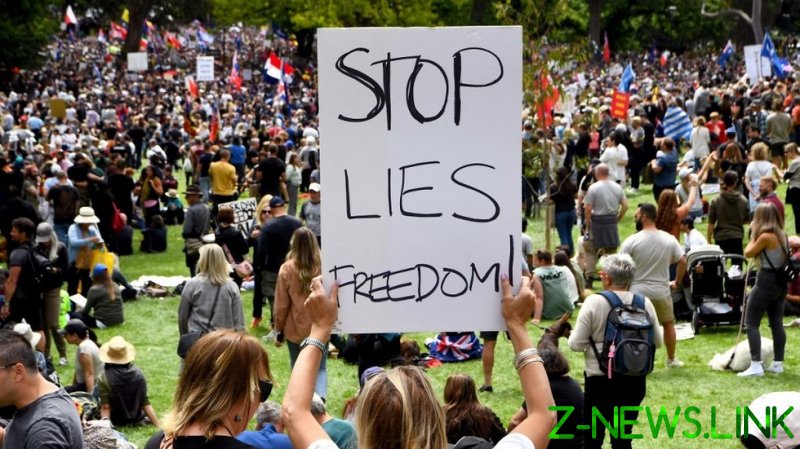 In Melbourne, Sky News reporter Sophie Elsworth described “tens of thousands of people streaming through the streets.” The march in Melbourne came after a week of smaller protests, aimed at Victoria Premier Dan Andrews’ controversial pandemic bill, which if approved by the state’s legislature would allow Andrews and Health Minister Martin Foley to declare an indefinite state of emergency and issue public health orders by decree – including “any order … that the minister believes is reasonably necessary to protect public health.”

Should the bill pass, it would allow Andrews to target certain classes of people with these orders, dividing them by age, occupation, or vaccination status. Fines for noncompliance would range from up to AU$21,800 for people and AU$109,000 for businesses.

Alternative media sources claimed that more than 100,000 people showed up to protest. However, the demonstration remained free of the violent clashes seen at protests in Melbourne in recent months.

“Australia has been willing to send troops to all parts of the world to help people become free,” one military veteran told a crowd of listeners during the protest. “To now be fighting oppression here in our own country, it’s saddening.”

Huge numbers of protesters also turned out in Sydney, and although more than 600 police officers were deployed to watch over the gathering, no arrests were made, 9News reported.

Holding signs decrying state “tyranny,” the demonstrators chanted “freedom” and called for the firing of state politicians, who have implemented a two-tier system where the unvaccinated are denied many of the privileges extended to the fully jabbed.

Similarly massive gatherings took place in Adelaide, Brisbane, and Perth, with no notable incidents of violence or police action. Further afield, protests are taking place in more than 120 cities around the world this weekend, in a loosely-coordinated event dubbed the ‘World Wide Rally For Freedom’ by activists.