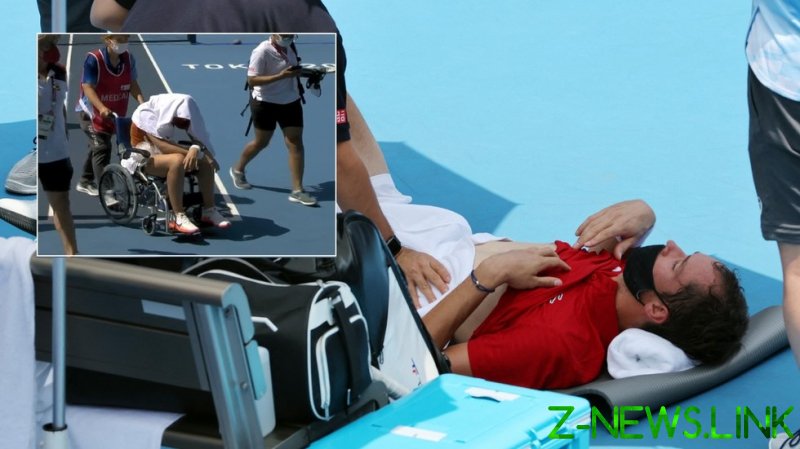 Men’s world number two Daniil Medvedev was among those to draw attention to the exhausting conditions players have been competing in during the Tokyo Games.

In heat exceeding 30C (86F) with added humidity while his third round win over Fabio Fognini was still being played, Medvedev was heard saying to the umpire, “I can finish the match but I can die.”

“I felt like my diaphragm has blocked,” the Russian later remarked. “I couldn’t breathe properly. It was the most humid day we had so far – maybe the hottest.”

But this was only the beginning, as Spain’s Paula Badosa suffered heatstroke in her quarterfinal meeting with Marketa Vondrousova and was forced to retire.

Unable to walk away from the court, she was wheelchaired out with a towel on her head and later took to social media to express her disappointment.

“I am very sorry that I had to end the tournament like this,” the 23-year-old lamented.

“It was my first Olympic Games with Spain and I had great hope in representing my country. I felt all your support behind me and wanted to give you a great result in return.

“I hope I can do it soon. Thank you all!,” the Catalan signed off.

The ITF later bowed to pressure to move the times of matches to hours which are expected to offer more forgiving conditions.

“​Following extensive consultation and in the spirit of always keeping the best interests of player health and welfare at the forefront of our decisions, the ITF has announced a change of schedule due to the increasing heat and humidity currently being experienced in Tokyo, Japan,” the organization announced.

As of Thursday, all games will be played no earlier than 3pm local time to “further safeguard player health”, in a conclusion that was arrived it after contact with the IOC, Tokyo 2020 organizers, players, referees and medical experts in addition to TV broadcasters.

Once the temperature exceeds 30.1C (86F), breaks of up to 10 minutes can be requested by both men and women, with Day 6 seeing Medvedev take on Badosa’s mixed-doubles partner Pablo Carreno in the men’s quarter-finals and her victor Vondrousova facing Elina Svitolina for a place in the women’s final.