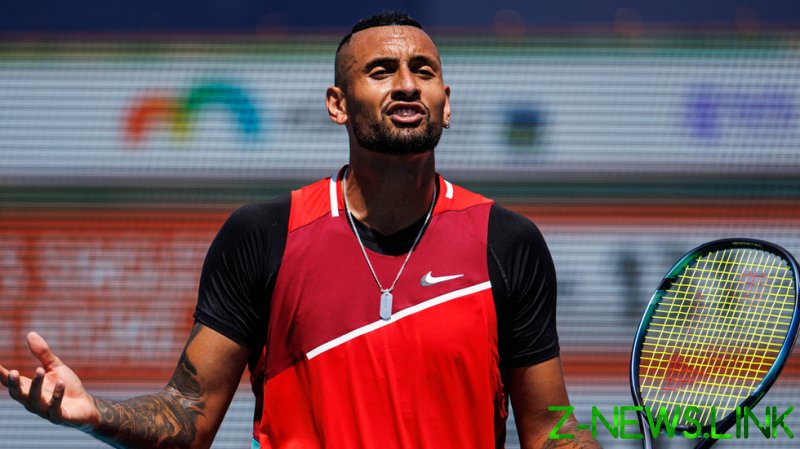 Tennis bad boy Nick Kyrgios raged at an umpire once more as he was knocked out of a third straight US tournament in meltdown fashion on Saturday.

The Australian world number 94 had managed to reach the semi-finals of the US Men’s Clay Court Championship in Houston where he faced Reilly Opelka.

Late in the second set of the eventual 6-3 7-5 loss to his American foe, however, Kyrgios lost it with the match official Joshua Brace who penalized him a point for an audible obscenity and also admittedly made an error on one call.

Kyrigos was lucky not to be punished again and lose the match when yelling out “F***!” as he headed to his seat for a changeover.

“I believe it now, I made a mistake,” Brace admitted.

“If it is out, then I did miss it,” the umpire had also said regarding the incident, which caused Kyrigos to sarcastically scoff: “Well, congratulations…”

Suffering on clay as has been common in his career, Kyrgios was unhappy with his own display and muttered loudly “F***** energy is useless this morning! Useless!” to himself during the defeat that saw him missing out on the chance to reach a first final since 2019.

“Do you feel bad?” Kyrgios asked Brace at the end of the match, adding: “I don’t think you feel bad.”

On social media, Kyrgios quote-tweeted a description of the debacle and laughed prior to saying: “[It] falls all on me”.

“Umpires seem to make these mistakes a little too often,” Kyrgios added. “A lot of players seemed dissatisfied with the performance of them this week in Houston. More punishment? Potentially new umpires? Semi final: ‘I missed it, Nick’ on clay [while it’s] 5-5 in the second set.”

As Opelka advanced to the final on Sunday where he will face John Isner, Kyrgios is now possibly looking at further punishment after paying a combined $60,000 for incidents in his last two tournament exits on US Soil.

At Indian Wells, he smashed a racket to the ground after losing to Rafael Nadal in the quarter-finals which bounced up and almost hit a ball boy.

Fined $25,000 for that, he then headed to the Miami Open where he smashed his racket again and blasted the umpire when losing to Jannik Sinner in the fourth round.

The ATP forced him to cough up $35,000 for unsportsmanlike behavior, with Kyrgios having repeatedly yelled “What is unsportsmanlike?” at umpire Carlos Bernardes who he also criticized for what he thought was a failure to control the crowd.