Ten years on, the US still promotes failed regime-change policy in Syria 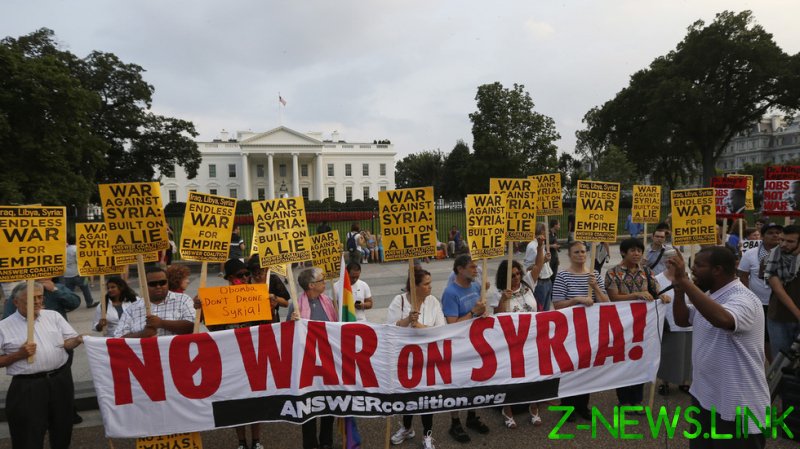 Back in 2001, former General Wesley Clark described a memorandum issued by then-Secretary of Defense Donald Rumsfeld which outlined a plan, as General Clark described it, on “how we’re going to take out seven countries in five years, starting with Iraq, and then Syria, Lebanon, Libya, Somalia, Sudan and, finishing off, Iran.”

Twenty years later, the world bears witness to the detritus of that vision. The US invaded Iraq, a seminal moment which saw a nation which espouses adherence to the so-called “rules-based world order” violate every rule in pursuit of the God-like power to dictate by force of arms the life and death of not only nations, but the millions of people who comprise the human element of what to the architects of these policies are merely lines on a map. Libya, Somalia, and Sudan have all become failed states because of US-led interventions. And, after ten years of incessant fighting, Syria serves as the front line of an ongoing US plan to take down that nation, together with Lebanon and Iran.

It was not supposed to be this hard. While Donald Rumsfeld and his band of merry warmongers avoided the temptation to follow-up the relatively easy defeat of Saddam Hussein’s Iraq by continuing to push into Syria, the Bush administration continued its regime-change fantasy by forming the “Iran Syria Policy and Operations Group” (ISOG), an interagency organization co-chaired by Liz Cheney (daughter of former Vice President Dick Cheney) and Elliott Abrams (of Iran-Contra infamy) dedicated to toppling the governments of both nations.

While ISOG was disbanded within a year of its creation, the regime-change policies it espoused continued in the form of the pursuit of less militant “velvet revolutions”, with the US seeking to foment change from within through the empowerment of domestic constituencies through so-called “digital democracy”—in effect weaponizing internet-based social media platforms. These “soft power” policies (as opposed to the “hard power” of military action) were embraced by the administration of President Barack Obama. It used them to promote the failed 2009 “Green Revolution” in Iran and, in the aftermath of the “Arab Spring” revolts of 2010-2011 which saw authoritarian regimes in Tunisia and Egypt collapse in the face of popular opposition, to mobilize similar grass-roots opposition to the Syrian government of Bashar al-Assad.

The Syrian “velvet revolution”, however, was hijacked early on by foreign-backed militant Islamists. By March 2011 heavy fighting broke out between the Syrian regime and Islamist forces. The US, together with its allies in Turkey and the Gulf Arab States, sought to exploit this fighting to destabilize and overthrow the Assad Presidency. By 2015 this plan had nearly succeeded, with more than half of Syria under the control of either al-Qaeda, the Islamic State, or US-backed Kurdish rebels. Only the intervention of Iran, Hezbollah, and Russia prevented the imminent collapse of the Syrian government.

Today, the rejuvenated Syrian armed forces have restored government control over much of its territory, with only Idlib province remaining as a last bastion of the Islamists who once threatened to raise the black flag of their movement over Damascus. But chaos still reins; northeastern Syria remains under Turkish and US occupation, with these two ostensible allies fighting a proxy war of sorts over the future of the Syrian Kurds living there.

The Islamic State, whose dreams of Caliphate were destroyed by the combined efforts of the Syrian government, Iran, Iraq, Russia, and the United States, continues to exist as an ideology capable of motivating tens of thousands of sympathizers to carry out terrorist attacks in support of their cause. And Israel is engaged in an increasingly hot war inside Syria to drive the forces of Iran and Hezbollah out of Syrian territory.

The primary facilitator of this chaos is the United States. Even after the intervention of Russia in September 2015 closed the door on any hope for regime change in Syria, the US continued to push the same failed formula, but this time expanding its scope and scale to include the goal of getting Russia and Iran to cease their support for the Assad government by making the cost of their continued presence in Syria too high.

Jim Jeffrey, the former US Special Representative for Syria Engagement under President Trump, openly bragged about policies designed to bring harm to the Syrian people as well as “inflicting pain” on both Iran and Russia in an effort to compel them to quit their support for Bashar al-Assad. “We’ve ratcheted up the isolation and sanctions pressure on Assad, we’ve held the line on no reconstruction assistance, and the country’s desperate for it. You see what’s happened to the Syrian pound, you see what’s happened to the entire economy. So, it’s been a very effective strategy,” Jeffrey said in an interview.

This, in a nutshell, is the policy inherited by President Joe Biden today—the continued support of an illegal Turkish occupation of northern Syria, the continued support of an illegal Israeli bombing campaign targeting Iran on Syrian territory, a similar Israeli covert campaign which has targeted Iranian tankers seeking to deliver oil to Syria, and continued covert support to Islamist forces operating inside Syria under both the al-Qaeda and Islamic State banners for the purpose of destabilizing the Syrian government and inflicting losses on both Russia and Iran which the US hopes will become a political liability in both countries.

Any notion of Syria serving as the post-child for the Biden administration’s efforts to re-tool the US as the standard-bearer for a “rules-based international world order” has been quashed by the reality of a US policy which, while ostensibly designed to prevent a resurgence of Islamic State activity and deny the Syrian government access to more than half of Syria’s oil production capacity, is in reality just a continuation of the failed regime change policies of the past.

This point was driven home in classic US diplomatic double speak proffered up by State Department spokesman Ned Price in a press conference held on March 11, 2021. The Biden administration, Price noted, continues to view President Assad as an illegitimate ruler. “He [Assad] has done absolutely nothing to regain the legitimacy that he has lost through the brutal treatment of his own people,” Price said. “There is no question of the US normalizing relations with his government anytime soon,” he added. Price pushed the concept of a “political solution” to the Syrian crisis, noting that any such solution “must address the factors that drive the violence, that drive the instability in Syria”—in short, must address the continued rule of Bashar al-Assad. “We’ll use a variety of tools at our disposal,” Price concluded, “to push for a sustainable end to the Syrian people’s suffering.”

The “tools” Price referred to are the same “tools” used by past administrations—economic sanctions and both overt and covert military action designed to destabilize the Syrian government and make the price for continued support of that government by its allies in Russia and Iran prohibitive. It’s a policy roadmap doomed to fail, but sustaining policy failure over time has become a post 9/11 trademark of the United States.