Teenagers rebuffed a drunken man with a pipe. Video 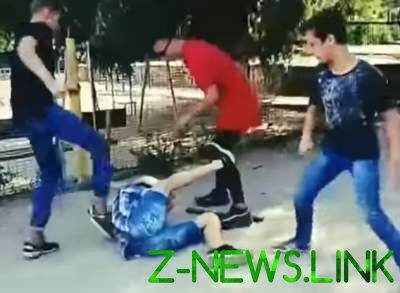 The guys used a gas canister and beat the man feet.

The network got the shocking beating men three young men in Kiev. In the fight young men used a gas canister. Another man was filming the incident on video.

The local newspaper managed to contact participants in the events, and asked them about the details of the conflict, and the causes of such manifestations of cruelty.

See also:  The Russians staged a mass brawl for the free potatoes. Video

According to one of participants of the conflict, 15-year-olds sat on the Playground or in the yard on the street Krivoy Rog (Shevchenko district). They were approached by a man with obvious signs of alcoholic intoxication. He started asking about a guy named Tom.

After the children answered that do not know you are talking about the man left. But after a few minutes returned with a piece of iron pipe in his hands.

See also:  Cyclist rescued a kitten on the side of the road. Video

The guys claim that the unknown was in a bad state, and behaved aggressively. And the brawl, which was watched by over 3 thousand people was the result of self-defense.