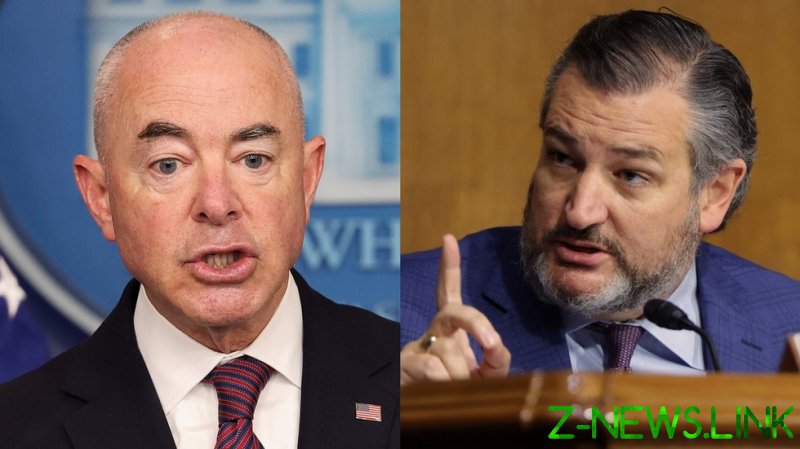 Mayorkas replied, “I … am not familiar with the term ‘cages’ and to what you are referring.” Still pressing Mayorkas for an answer, Cruz clarified that he meant the enclosures in which migrant children are kept, which he photographed during his documentary-style trip to the facility in March.

Cruz pointed out that the Biden administration blocked the media from seeing the enclosures first-hand at the time.

The Senator then displayed a blown-up photo that he took of the Donna facility, showing children crammed into a metal enclosure inside a tent, sleeping on the ground. The senator also grilled Mayorkas over whether President Joe Biden and Vice President Kamala Harris have visited the Donna tents. The Department of Homeland Security (DHS) chief acknowledged that neither had been to the detention facility.

The tense exchange was part of an onslaught of questions by Cruz and other Republican senators amid historically high flows of migrants across the southern US border. Mayorkas estimated that more than 2 million illegal aliens will cross the border this year – not counting an unknown number who evaded detection by Border Patrol officers. About 125,000 unaccompanied children are reported to have crossed the border in this year’s first 10 months, with minors flooding in after the White House pledged not to expel them.

Mayorkas said in his opening statement that everyone agrees the US immigration system is “fundamentally broken,” a situation that he said Congress needs to fix. Cruz, noting that illegal border crossings are at a 61-year high under Biden after being at a 45-year low under former President Donald Trump, accused the Biden administration of being directly responsible for the current state of the US immigration system. “You’re right, it’s broken, but you broke it.”

Nevertheless, when questioned by Senator Lindsey Graham (R-South Carolina) on whether the Biden administration has more control over the border than its predecessor, Mayorkas replied, “I think we have more control that is consistent with our values as a nation.” The DHS chief also told Graham that he would give himself an A grade for his performance.