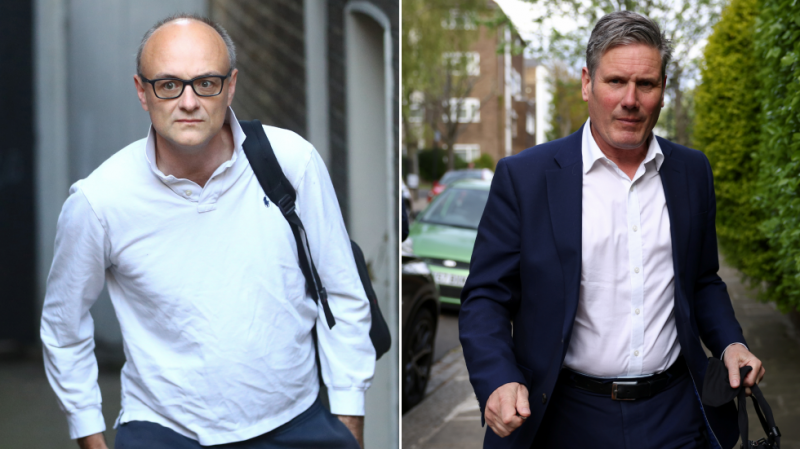 Sir Keir Starmer may have all the personality of a cardboard cut-out, but there is one man who can make this bland and boring bloke electable: Dominic Cummings. Think about it. It makes perfect sense. Cummings was the brains that brought about Brexit, the pipedream of a few fringe nuts in the Conservative Party plus Nigel Farage.

And then there’s what he did for Boris Johnson himself. BoJo, to plenty of people in the UK, was just a bumbling buffoon and dodgy journalist who had blagged his way to becoming mayor of London. Along came Dom, and he somehow oozed into 10 Downing Street.

To be fair, though, BoJo beating Jeremy Corbyn in the 2019 election was easy. Corbyn’s brand of socialism expired 40 years ago, and there were never likely to be enough voters to get behind it, although it seems a sizable chunk of the Labour Party have never checked the sell-by date on the tin.

The British electorate have moved on since the 1970s, though, even if Labour hasn’t. The so-called Labour Red Wall in the north has crumbled away. Even Hartlepool has fallen, a town that once – and it might even be true – hung a monkey believing it was a French sailor.

They were always gonna be anti-Europe up there if they hung monkeys for being French; almost 70 percent voted to leave the EU. Anyone who actually listens would know this. Dominic Cummings, for sure, was aware of this when he was masterminding Brexit.

Dominic Mckenzie Cummings grew up just 25 miles up the road in Durham, although he was hardly a working-class boy. The farm he escaped to during the Covid lockdown rules he helped devise belonged to his hugely wealthy father. Dom went to the posh Durham School and then on to Exeter College at Oxford University.

Yet the most crucial factor is that Dominic Cummings is not a Conservative. “I’m not Tory, libertarian, ‘populist’ or anything else,” he wrote in his blog. “I follow projects I think are worthwhile.”

Righto, then, Sir Keir, get on the phone… now! And convince Cummings your project is worthwhile. Especially because Cummings is so mightily pissed off with Boris since he was dumped as his special adviser late last year.

He lost a spat with BoJo’s better half, Carrie Symonds. And there have been an awful lot of leaks lately about the cost of redecorating Carrie and Boris’s love nest in Downing Street. Cummings, of course, denies being the source. But this is another key point for Sir Keir – Cummings knows where the corpses are buried; he understands his old boss’s weaknesses. And there are plenty.

Hell hath no fury like a special adviser scorned. Cummings is very much a lover spurned, and he is far more dangerous than any female that BoJo has been caught in a tryst with.

Labour signing Cummings would be like Manchester United suddenly signing Pep Guardiola from Manchester City. But right now, the Labour Party are nowhere near even being a Premier League side.

They have become what Jeremy Corbyn and his ilk have been since the 1970s – a third-division pressure group. So long as these people get to sing the Red Flag at the close of their party conference, they’re happy. They’d rather lose than win anyway, it seems to me.

Now the Labour Party is adrift, and it may well be doomed. Sir Keir has reshuffled his Shadow Cabinet a bit, but he couldn’t even get rid of his hapless deputy Angela Rayner. Somehow she ended up being promoted for the failure of a campaign she helped mastermind.

The forces that drove Labour off the Corbyn cliff in the first place are still alive and well. Khalid Mahmood quit as Labour’s shadow defence minister, accusing the party of having given way to a “London-based bourgeoisie” and “brigades of woke social media warriors.”

Man, anyone who has ever lived behind Labour’s so-called Red Wall knows this already – Sir Keir and his deputy taking the knee and promising to send every Labour Party worker on an unconscious bias training course simply doesn’t wash up north. Wasn’t George Floyd, err, American? Wasn’t he killed in America by an American cop? What’s all that got to do with Hartlepool?

The woke Guardian-reading warriors walled in by the M25 London ring road will never get it either, no matter how many elections they lose. They believe they’re in charge because they work in the Civil Service or the BBC or in publishing or whatever. They believe in the sound of their own echoes. There aren’t enough of them, though; they cannot win an election with their votes alone.

Guess what, though? Dominic Cummings got it. This from his blog a few years ago: “The MPs and pundits get up, read each other, tweet at each other, give speeches, send press releases, have dinner, attack, f**k or fight each other, do the same tomorrow and think ‘this is reality.’”

Brexit happened partly because Cummings understood it was even feasible. Boris Johnson was no arch-Brexiteer; all he wanted to do was back the winner to fuel his own ambition. Now there’s talk of him being prime minister for a decade.

They’re not Guardian readers up in Hartlepool, they’re not natural wokeists on the other side of that crumbling Red Wall. They’re suspicious of all that, and especially the preachy tone set down south by ‘people who know best.’

In his latest barrage of tweets at the weekend, Dom had a swipe at both his old boss and Sir Keir, but he also said Labour could win the next general election “easy.”

It’s not healthy in any democracy for there to be no viable opposition that can actually take power. I reckon Labour should become like the Democrats in the US – that is, to not lean so hard to the left, and therefore actually be electable on the ground where most elections are won and lost, in the middle. Tony Blair got this simple reality, and he won three general elections.

So come on, Cardboard Keir, get on the phone. Give Dom a call.