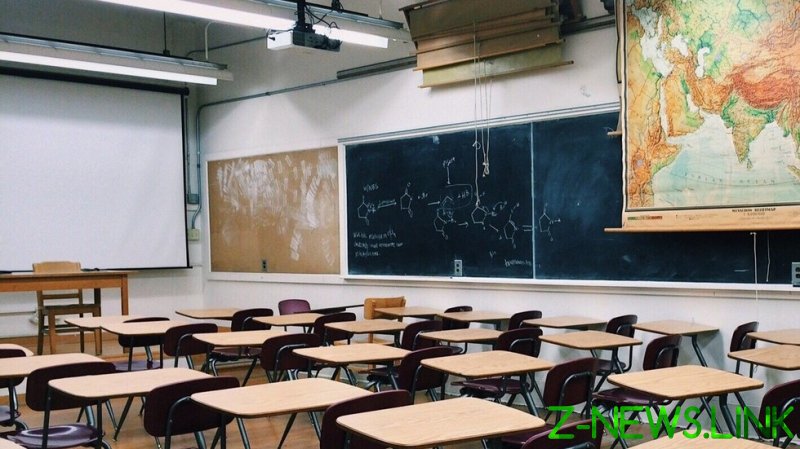 Located on the outskirts of Washington, DC, the Loudoun County Public School District is one of the wealthiest in the nation, with the average household there pulling in $136,000 per year. It’s also emerged lately as a hotbed of Critical Race Theory (CRT) – a set of ideas that puts race at the center of every human interaction, views the US as “structurally racist,” and maintains that “white supremacy” and “white privilege” permeate every institution in the country.

Video footage posted on Monday shows how this plays out in the classroom. In a bizarre lecture at one of the district’s schools in Ashburn, a teacher shows his students an image of two women standing beside each other, one white and one black. “Tell me what this seems to be a picture of?” he asks.

“Right, just two people. Nothing more to that picture?” the teacher shoots back.

The teacher then accuses the student of being “intentionally coy” about what he sees in the picture, saying, “I don’t believe that you look at this as just two people.”

“Are you trying to get me to say that there are two different races in this picture?” the student asks.

“Yes, I am asking you to say that,” the teacher admits.

The student then accuses the teacher of “feeding into the problem” of racism, but the teacher insists that “you can’t look at the people and not acknowledge that there are racial differences.”

After parents emailed the school board asking why Critical Race Theory was being taught in the classroom, board member Beth Barts posted an explanation on Facebook, stating that the video showed part of a “Dual Enrollment College Level English course,” in which students were “exposed to different literacy theories as a way of critiquing different pieces of literature,” CRT among them, according to the Daily Wire.

In a statement last week, Interim Superintendent Scott Ziegler said that while Loudoun County schools discuss “concepts such as white supremacy and systemic racism,” CRT has not been formally brought into the curriculum.

A certain group of woke teachers and parents, however, have taken matters into their own hands. Police previously said they were investigating the ‘Anti-Racist Parents of Loudoun County’ Facebook group, where members compiled lists of parents they felt opposed the teaching of CRT. Members, including board member Beth Barts, planned on exposing these supposedly “racist” parents publicly, “infiltrating” their own Facebook groups with fake profiles, and spreading malicious rumors about them, according to the Daily Wire.

One parent on the list told the Daily Mail that the group “wanted to send postcards to our neighbors calling us racist and come to our home with a megaphone and call us racists.”

Though the police are investigating the group, the Daily Wire reported that the county’s prosecutor, Buta Biberaj, is also a member of the group. Biberaj was elected in 2019, after her campaign received more than $650,000 in donations from a Super PAC funded by billionaire liberal financier George Soros.