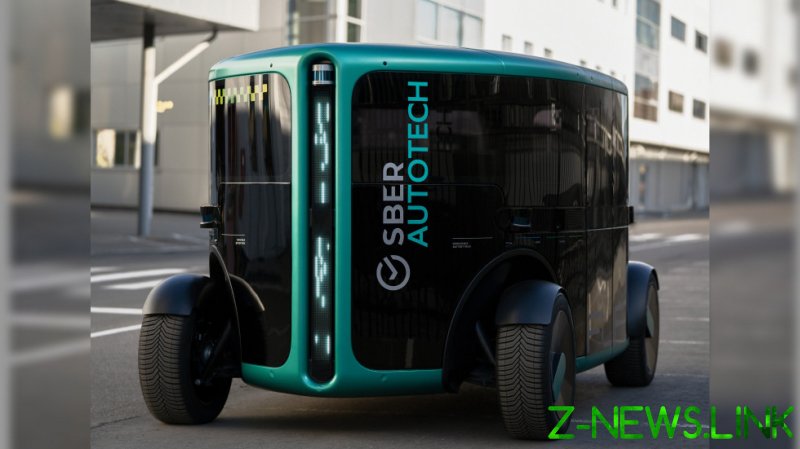 Dubbed FLIP, the project represents the latest, fifth generation of self-driving vehicles, meaning it’s fully autonomous and has neither driver’s seat nor dashboard in it. Being the size of a regular passenger car, it’s 40% more spacious, according to its developers, SberAutoTech. The futuristic vehicle – the prototype resembles a sleek cable-car cabin with wheels – can accommodate up to six people.

Developers are touting the vehicle as both “taxi of the future” and “transport of the new generation.” An electric platform has been created especially for FLIP, using both electricity and other alternative fuels to make it move.

Its rechargeable batteries can be replaced within five minutes, creators promise, saying it basically matches the amount of time that it takes to refuel regular car at a service station.

Augmented reality (AR) and radar technologies, as well as cameras are used for the self-driving vehicle, which will be accessible to passengers through an app. FLIP is now being tested in enclosed areas, and is expected to be unveiled to the public next month.

In recent years, self-driving cars have become no strangers to Russia’s roads, as over a hundred of such vehicles are being tested by the Russian tech giant Yandex Self-Driving Group. It too has been developing its driverless taxis – since 2016 – but these look more like regular cars. Frequently seen in downtown Moscow, the cars always have a driver present inside, as autonomous vehicles are still not allowed on public roads. The first unmanned taxis could hit Russia’s roads by 2024, transport officials have suggested.

An American self-driving car project, Waymo, is currently operating in Arizona. The commercial autonomous ride-hailing service, originally developed by Google, has hundreds of vehicles and transfers passengers without drivers. In the UK, trials of driverless shuttles are ongoing in Cambridge, where passengers can hop on smart technology buses equipped with cameras and laser scanners.