Home / economy / Taxes in Russia a method of destruction of the economy?

Taxes in Russia a method of destruction of the economy? 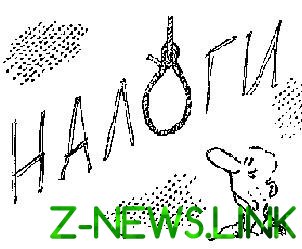 The tax system in Russia is structured in such a way that it inevitably does harm its economy. Still: it is at the origins of the modern tax system of Russia are the foreign experts of the international monetary Fund. And Fund this, as you know, created for the colonization and devastation of those countries that the Fund itself is well looked after. Because of the unsecured loans blank green paper that the Fund takes the tangible good of the country.

It is increasingly clear that power over us, the West got after Yeltsin’s coup in 1993, has all the features of a color revolution. After all, the main purpose of the coup was the collapse of socialism — a planned state economy and public ownership of the means of production — capitalism — the market of natural competitive economy and private ownership of the means of production.

The transition from a planned economy to a market economy occurred too abruptly. Creation of all necessary systems to build a market economy required a deep analysis of the existing market economies and compare them to Russian realities, but this was not done. The market was a shock to the economy. And created this shock of foreign consultants, introduces capitalism. In 1992 in Russia there was no private tax theory. Its creation was engaged foreign experts who knew Russian accounting, its characteristics. Moreover, in recognition of Putin, among them was a career CIA agents. So, they have deliberately destroyed our economy. After all, the official purpose of the creation of the CIA — the destruction of the Soviet Union, which was done. Experts of the Ministry of Finance, state tax service, who trained in Denmark, Holland, Germany, as a rule, poorly mastered professional language, and even after training had no clear idea of how to organise the tax system in the market. Adopted in 1991, the tax laws were drafted in a hurry and had a lot of shortcomings.

International expert M. Hudson wrote: “the Advice that gets Russia (the reform of the tax system) from the International monetary Fund, the world Bank and U.S. consultants – not the best properties. The Russian tax system now encourages speculation rather than production…” (Taxes and taxation.: Uch. allowance. M.: Finance, UNITY, 1998, p. 451.)

Of course, such as the tax system has led to a huge number of amendments, clarifications. On the one hand, was declared to be the policy of developing business. On the other hand, the unpredictability of the tax system would stop this development. Tax risks assessed as very high. This reduced the investment appeal of Russia. Small and medium businesses began their work in the shadows. In the first year the tax system showed the inconsistency serious budget deficit. Such a deficit (28 % of GDP for the 3 summer months of 1992) has not been since the end of World War II. The purpose of the tax system in a market economy is in contrast, replenishment of the state budget.

Today the picture has changed very little. The tax system remains cumbersome. Moreover, this system is not conducive to economic development. It focuses on the recovery of proceeds of enterprises and the elimination of the budget deficit.

It turns out that the tax system is developing by itself, with the purpose of replenishment of the budget. And businesses are trying to survive, experiencing excessive pressure of the tax system. This can be compared to serfdom — the serfdom and dues, which just robbed the peasants, creating the product. Peasants themselves this product enough had. The purpose of the tax in the economy — to provide General government expenditures so that the state provided an opportunity to efficiently conduct business. This is not happening. For Russia the spread of corruption, theft nationwide state budget — almost ahead of the rest. Cut the budget — a typical Russian concept. Since the budget is more and more is stolen, the tax burden on businesses increases. Many businesses become unprofitable, closed, or bankrupt. This also contributes to the monopolization of the market is a tendency of formation of large holdings, which suppress small and medium-sized enterprises, giving them the opportunity to compete in the market.

Tax policy of Russia is based on the principle – “the higher the rate, the better for the state and the creation of a market economy”. As a result we have reduction in the production of goods, the decline in investment activity and the absence of any involvement of companies in the development of production, and as a result – the shortage of taxes in the budget.

Increasing the tax burden forces businesses to shift their tax burden on the final consumer of the products produced by the company. Taxes included in the retail price of the finished product. So, our tax system encourages the growth of prices and, as a consequence of the lower incomes.

It is possible that the manufacturer of the product has the ability to dictate price to the consumer and to increase it, trying to get as many benefits for personal enrichment. In Russia the share of indirect taxes (which are included in the cost of goods) is growing. This indicates a disadvantage in taxation, the desire to increase tax revenues at any cost. And such policies cost high – economic stagnation, inflation, multiple (thousands of times) the growth of prices for consumer goods. And to research the economy is irrelevant, rather — to the unscientific, predatory system of enrichment for those who are in the hands of the levers of the establishment of the rules of the game in the market.

In 2014 the tax system of Russia provides incentives for private investment in the stock market. The tax Code provides for the exemption from tax of income from the sale of securities. And who do we have in the country engaged in the buying and selling of securities? Clearly not ordinary citizens. This measure makes the rich even richer and therefore the poor become poorer. That is, the taxes increase social inequality. After all, these predatory taxes as it is now, leave small and medium entrepreneurs only one choice: or to leave in the informal manner of conducting business, or go broke — losing business.

Unacceptably low tax deductions for individuals stimulate citizens to evade taxes, and therefore from social security payments. And an aspiration for all, even those who have low wages. The government doesn’t care about people, I ask, why do people care about the state, pay taxes to the budget? In addition, the media often is given information about the cases of theft occurring in official circles.

It’s the same with entrepreneurs. High rates of income tax and income tax lead to the fact that the business is simply not profitable to increase profits.

According to a report by auditing and consulting company PWC, in the aggregate tax burden on business Russia surpassed almost all the major developed economies and managed to come out on top — not honorable! – place in Europe. According to the experts of the company quoted in the report “Paying Taxes 2013”, the average effective total tax rate on businesses in Russia is more than 54.1 per cent, significantly above the level of the tax burden in European Union countries (42,6%) and in General in the world economy (44.7 per cent).

Final grade in Russia PWC experts have got due to the summation of three effective tax rates – the income tax (7.1 percent), taxes on labor or wages (41,2%) and “other taxes” (5.8 percent). It should be noted that the experts were not taken into account a number of very significant cumulative burden on business taxes and fees to the budget – first of all, the met and a number of excise taxes and duties. With these fees the real effective rate reaches 65-70% (!). This led to the fact that at the beginning of the current year in tax inspections there was a huge queue for the closing of small businesses. According to the Federal tax service of Russia, in 2013 the number of closed individual enterprises amounted to 3.7 million

For comparison, the average tax rate in the major developed countries with a high standard of living of the population included in the OECD group does not exceed 42.7 percent. And is subject to the availability of albeit far from perfect, but nonetheless quite effective system of social support of the population.

The conclusion is that this system is more like a robbery of the business, the killing business, not the tax system. Often tax service add to the lethality of the business, arranging a partial check, having a plan to collect a certain amount of fines, and often not having the right not to take penalties. They often say: “I will Not give — will increase, it will be worse”. For example, in the past Olympics and collected by the state — with the world on a string, often at the last… in Such a hearing the world of business is rife.

In Russia the system of social support of the population in a bad way. To social benefits provided in our state, it is impossible for citizens to meet social needs.

The Russian Government there is no justification for such high tax rates. Almost all businesses are forced to borrow. While rates on the loans are predatory and reach 22%.

Analysis of the Russian tax system allows you to draw only one conclusion: the tax system in Russia is actually a tool by which powerful people Supplement the budget to the detriment of the economy and enterprise development. The purpose of the budget is obvious – the more money in the budget, the more you can steal. As drafted the current tax system is effectively a brake on the development of the economy and stimulate the growth of prices. Moreover, it indirectly leads to a decrease in the already low social benefits to the population. Or, as is now customary, to the reduction of state employees to preserve benefits.

As a result, we have a state with the highest tax rates, highest interest rates, lowest payments and lowest income population.

So, apparently, ends with the destruction of the entire state. After a time of adjustment and reform since Yeltsin’s coup, the country went bankrupt and liquidated more than 400 thousand enterprises, destroyed about 40 thousand villages… During the first default, arranged in the country market banking system, we were only saved by the small and medium entrepreneurs, we survived only thanks to them. Apparently, therefore, everything is done to ensure that the impending crisis to save us there was no one. Then the famine and mortality of the indigenous population will be just devastating for indigenous people, but satisfactory for those who have already ready our country to settle. Isn’t it?