Home / WORLD / Tara Reade: I thought I was a sexual assault survivor, but apparently Facebook thinks that makes me a ‘dangerous extremist’

Tara Reade: I thought I was a sexual assault survivor, but apparently Facebook thinks that makes me a ‘dangerous extremist’ 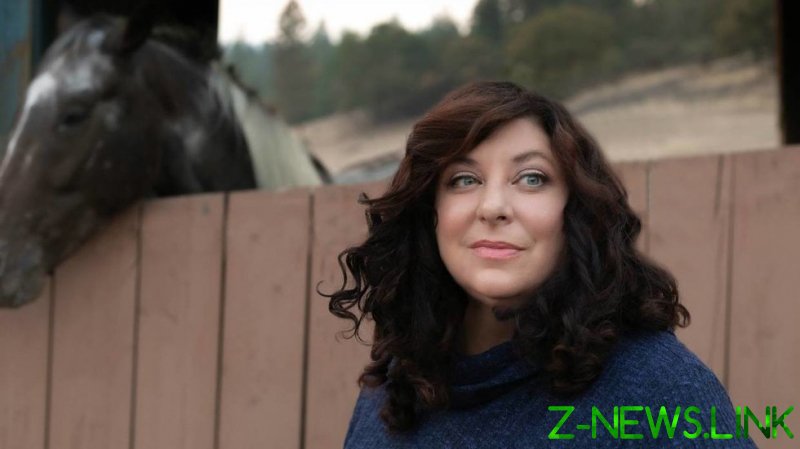 In 2019, after the media began their onslaught against me, I woke up to my friend texting me she had left me a present to cheer me up outside my door. It was a copy of Anna Karenina and a note to stay away from train tracks. I smiled at the joke.

No one wants to be notorious. There is a stark contrast between being famous and notorious. One can be famous for performance, work, or art. To be notorious for something that happened to you is a cold and lonely place to reside. The advent of the internet has brought a new level of mob participation on issues; some are paid, some are earnest, and some unhinged, but they may as well be running down the street with pitchforks, as the atmosphere created by such events is the same.

Online social media was called the Wild West until powerful elites decided to lasso some voices that were too loud and too truthful. Tech giants like Facebook, Twitter, Instagram, and others started sifting through content and systematically deplatforming voices that challenged the American empire, especially after the January 6 attack on the Capitol.

The elites got nervous, apparently fearing some did not want some messy French version of democracy to spill the blood of the establishment on the streets. A fortress was erected around the Capitol, the National Guard deployed, and the media was virtually ordered to keep in lock step with establishment politicians; voices of dissent on right and left were threatened into silence. I never really understood why people wanted to defend another billionaire, Donald Trump, instead of the working class. The root of their actions that day remains a mystery.

In the aftermath of the violence, elite members of both parties lamented the lives lost and ‘domestic terrorists’ were announced to be the public enemy. Members of Congress like Alexandria Ocasio Cortez (AOC) and POTUS urged people to report friends and family engaged in dangerous political extremism.

In 2019 and 2020, I came forward to reveal my history with Joe Biden and what he did to me as a staffer. I was called many names by social media trolls and Biden supporters, including ‘slut’, ‘bitch’, a ‘Russian whore making all my money on my back’, a ‘liar’, and worse. There were death threats, a chorus of trolls chanting to lock me up, work lost, relationships ended, professional credibility destroyed. I lost my house and was generally shunned like some pariah.

I pushed back by writing my book and giving interviews where the media allowed. During the election, Facebook suppressed my name as “election interference” – then when I tried to buy ads for an online book event I was not allowed, on the grounds of “interference with future legislation.” My assistant, activist, and supporter Avalon Clare tried to purchase social media ads, only to be blocked because my name, “Tara Reade,” was not allowed.

Avalon, an artist, runs my author Facebook page, as I gave up on that platform long ago – leaving it to the boomers, rabid Democrats, and scary older white women who foamed at the mouth at the mention of my name as they stridently screamed to protect Joe Biden. I was a ‘Russian apologist’, a ‘Bernie supporter’ not to be listened to or considered. I mean, Joe Biden’s campaign spent millions on public relations, so you get what you pay for like a good little capitalist, even if that is to let the powerful commit rape and walk away.

The Department of Justice seized my social media information under sealed search warrants and empaneled a grand jury. My lawyer was unable to get further information, even though it was my information, as everything is still under seal. The only reason I know about this is a lawyer from Twitter called to tell me they’d received eight attempted search warrants and had to file motions to even let me know I was under scrutiny. Edward Snowden warned us about the loss of privacy and sacrificed his freedom to release the proof. Glenn Greenwald discussed the NSA’s wide net to gather information about American citizens recently with Tucker Carlson.

Recently, one of my supporters tried to post an interview I did with Primo Podcast on Facebook.

After clicking to post, she was greeted with a warning that she may have been exposed to “harmful and extremist content” and my picture, along with a button in case she needed to “get support.” 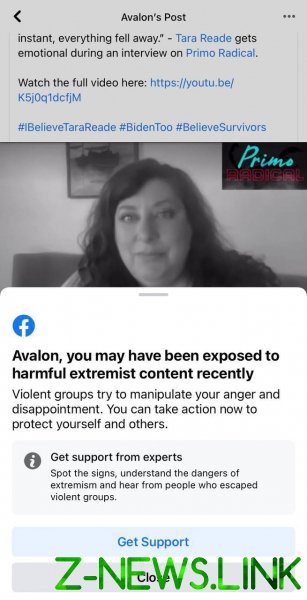 This is not new; many political voices have been censored. Noam Chomsky’s Facebook livestream was interrupted at the Progressive Summit in 2020. In his piece for Ceasefire, Harry Halpin wrote about the abrupt deplatforming of an online event.

As the Progressive International’s spokesperson stated:“We are deeply disappointed that Facebook is blocking people coming together across borders to confront humanity’s shared problems at the Progressive International’s launch Summit. We wanted to livestream today’s public events, which include keynote speeches from Noam Chomsky, Naomi Klein, Yanis Varoufakis and a panel discussion about anti-democratic lawfare in Latin America. We don’t know why Facebook is preventing people watching on its platform, but we strongly urge them to reverse its decision, allow our event to take place unhindered and commit to operate its content moderation in a transparent manner.”

It never occurred to me that by simply telling the truth and discussing the sexual assault I endured at the hands of my former boss, who just now happens to be the most powerful man in the world, I would be labeled a ‘dangerous extremist’. I am not an insurgent, or even a Republican or Democrat. It is ironic that I’m considered ‘violent’ when, as an anti-imperialist, I espouse peace.

The method to silence any form of dissent rooted in truth is very old and deeply Machiavellian. Niccolo Machiavelli outlined in ‘The Prince’ (the politicians’ and oligarchs’ bible) how fear could be weaponized to coerce the masses into huddled silence. The Stalinesque cry to “report friends and family” echoes around social media, while the digital gulags wait to incarcerate any who question the status quo.

How we approach the next paradigm shift is important. We can choose to ignore these tech giants and innovate our own platforms, create our own space for voices to be heard with no corporate overlords. If we can unite our diversity to create and support, rather than destroy for profit, there may be a chance we can save our own humanity, one soul at a time.