Home / WORLD / Tara Reade: Here’s why we have to march for healthcare in America

Tara Reade: Here’s why we have to march for healthcare in America 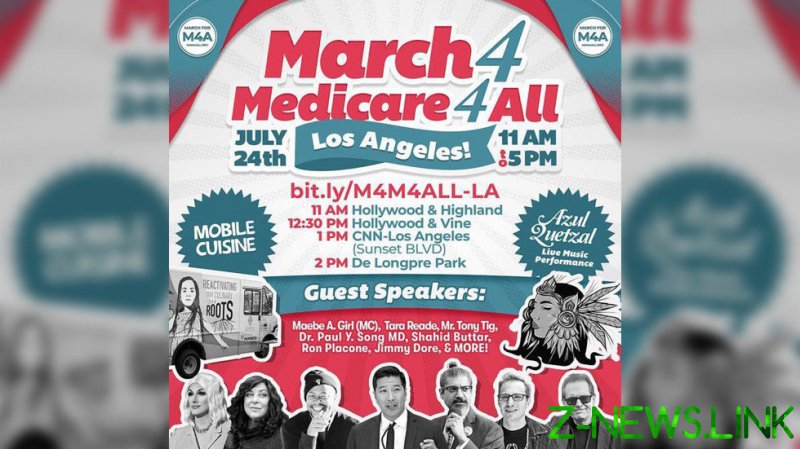 This month, billionaires launched their obscenely expensive metal phalluses into space at the cost of multimillions and the mainstream press toadies to them like obsequious little lap dogs.

However, the always entertaining congresswoman from Hawaii, Tulsi Gabbard, was widely praised on social media after dragging Jeff Bezos as he rocketed his 59-foot midlife-crises-mobile into the face of God. The oligarchs think we are against space exploration if we critique their inability to read the mood of the whole planet; perhaps that is why they are so keen to leave it?

The oligarchs are a generally very obtuse bunch. I love the idea of space exploration as much as the next person, but when these multinational corporations earn billions and pay no tax, we are going to have a lot to say as millions of US people’s housing, nutritional, medical and educational needs remain unmet. Over 55 million Americans have no healthcare coverage and millions more are underinsured. According to the Gravel institute, Americans carry $140 billion in medical debt, whereas citizens of other advanced nations have no need to even consider such a thing as “medical debt.”

The cost of basic healthcare and prescriptions is astronomical in the United States. The debt can be crushing. I know. When I first came forward about Joe Biden, the social media trolls sent me direct messages to be quiet or they would post my bankruptcy. I did not care, but crucially, the bankruptcy I filed was not related to credit card debt, rather was mostly medical and educational debt. As an advocate in the field of domestic violence, I saw many victims unwilling to leave abusive partners for fear that they would lose healthcare coverage for the family. Also, the lack of access to proper medical, dental and vision care for the lower income citizens is still a systemic reality.

Like so many Americans, an unforeseen illness or accident can mean losing everything you have built financially. I have had several close family members die of cancer. My brother who was fully insured when he was diagnosed with cancer experienced the additional stress of horrible debt and loss of his insurance when, after he was too sick to work, he lost his coverage.

This also resulted in him being unable to afford certain treatments. This is the stark reality of privatized medicine in a capitalist system. Too sick to work, well then, goodbye health insurance. Joe Biden said that “capitalism is alive and well,” what he failed to add is that so is unchecked greed and grinding poverty which goes with it.

As soon as it was announced I was speaking at the M4M march, a movement of diverse citizens reflecting various political views, the troll farms crawled from under their collective bridges, gnashing and spitting out the same old negative tweets attacking all the speakers and organizers.

The Democratic elites just want Americans subdued and willing to accept their version of a fix, like the Medicare age being lowered. A battle started again between the not so left and lefty supporters of M4M. Where is the squad? Where are the progressive Democratic politicians that ran on a platform that they would fight for Medicare for All? They remain silent about this multi-city march.

The question is why don’t “social justice” Democrats want the same thing they promised progressives when they were running? The answer is Big Pharma owns America’s politicians. Look at the FEC filings of your favorite politicians. Biden? Well, he is backed by DuPont and Bristol Myers Squibb among others. The establishment Democrats have already broken out their strategy to undermine the march by having Nina Turner and AOC plan a “day of action” the same day. The social media battle tweets on.

Many Americans have stories of being turned away at an emergency room when seeking medical help because they did not have money to pay or insurance. So yes, we are all so glad that capitalism is alive and well as America engages in the ultimate game of natural selection.

This Saturday there will be personal accounts told about our need for Medicare for All and affordable prescriptions. There will be stories of the deaths and bankruptcies of citizens during a pandemic. Americans are forced to beg for the bare minimums. Yet, the American government finds the money to bomb other countries, and our billionaire class literally proves that, for them, even the sky is not the limit.

Why America would not embrace the opportunity to have a healthy and educated workforce is beyond me; it seems we are hell bent on internal implosion. Many US citizens are now demanding better wages, no medical and educational debt, this is not even utopian, this is just in line with other developed nations. If America stays on the course of crushing its citizens with inflation, medical debt, educational debt and stagnant wages, it will not be sustainable.

Jackson Hinkle, an activist and podcast host, spoke to me recently about the march and the stakes it holds for so many Americans.

American exceptionalism is a myth perpetuated by the top 1% because it serves their narrative and keeps them in power and the false dream of ‘opportunity’ is dangled in front of the populace to distract it from the harsh reality and suffering Americans are faced with every day. The demand for Medicare for All is a battle cry the politicians should hear or the result might be far more than just losses in their upcoming primaries.