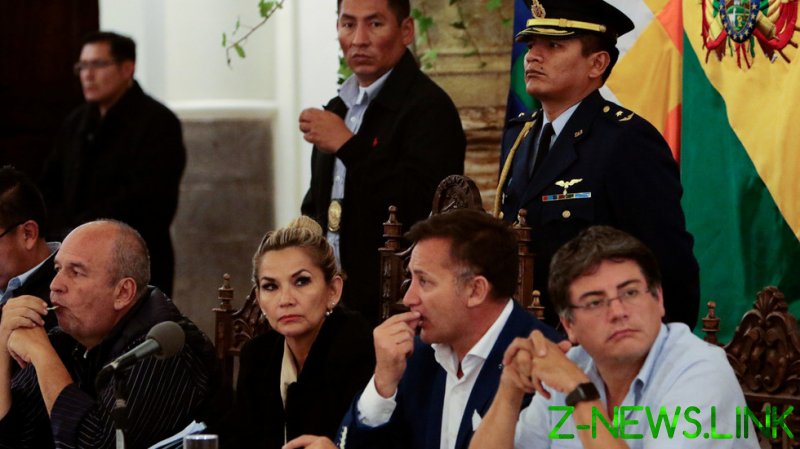 Anez took power in Bolivia in November 2019, after mass protests backed by the country’s military and police forced Evo Morales to flee from the country rather than continue governing for a fourth presidential term after winning elections. The protests were triggered by claims of election fraud, which were promoted by the Organization of American States and were later proven to be groundless.

The new government used force to suppress dissenting people from Morales’ left-wing Movement towards Socialism (MAS) party and made a sharp right-wing turn. It also repeatedly delayed holding a new election, which was supposed to be the primary goal of Anez’ caretaker presidency.

Pressured by mass protests, she eventually agreed to hold the ballot last fall. MAS candidate Luis Arce, who served as Morales’ economy minister, won it in a landslide, avoiding a second round by getting 55.1% of the vote. Anez herself came a distant fourth.

As Arce was celebrating his victory, Anez and her ministers were plotting a second coup, which would allow them to overturn the will of the Bolivian people, the Intercept reported on Thursday, citing records of conversations and email exchanges detailing the conspiracy.

The key figures in the plan were Luis Fernando Lopez, who served as Anez’ defense minister, and Joe Pereira, a former civilian administrator with the US Army, according to the report. Pereira was supposed to recruit mercenaries in the US and help fly them to Bolivia. There they would join forces with elite military troops from the Bolivian army, police units and right-wing vigilante mobs to quash MAS supporters.

“I can get up to 10,000 men with no problem” Pereira bragged in one alleged conversation. “All special forces. I can also bring about 350 what we call LEPs, Law Enforcement Professionals, to guide the police.”

The number of troops appears to be a boast on Pereira’s part. One of the US-based recruiters he turned to for help told the Intercept that one “couldn’t get 10,000 people even if Blackwater was back in business and going back to Iraq.” But email exchanges indicate the planning was in an advanced stage and that at least 250 contractors were ready to take part in the ‘Bolivia project’, before it was called off.

On the Bolivian side, officials had three Hercules C-130 transport aircraft that could airlift the hired guns and their weapons from the US. Pereira said he wanted to “pick up personnel in Southern Command in Homestead Air Force Base in Miami.” Two US military sources told the Intercept that the US Special Operations command was aware of the coup plot, but one source said that “no one really took them seriously.”

Some details of the conversations matched very closely the claims that Morales made in early November. He accused General Sergio Orellana, who was appointed commander of the Bolivian Armed Forces by Anez, of pressuring other top military officers into launching a military junta to prevent an Acre presidency. Lopez assured co-conspirators that Orellana was ready to initiate “the military operation” against MAS.

The plans were never put into action. Lopez apparently couldn’t secure support of enough military commanders and had a falling out with then-Interior Minister Arturo Murillo, who was in charge of the police. General Orellana and both ministers were among members of the Anez administration who fled Bolivia after Arce’s victory and before his inauguration.

Murillo was arrested by the FBI last month. He is suspected of taking a bribe to sign a contract for supply of tear gas from a Florida-based firm at an inflated price.

Anez was arrested and charged with crimes related to how she took power in Bolivia. Pereira is likewise held in a Bolivian jail awaiting trial on fraud charges.

The Intercept believes it was highly unlikely that the plot had some tacit approval or support of the US government. It seems closer in nature to the attempt to overthrow the Venezuelan government, which involved the private security company Silvercorp USA.

The incursion of US mercenaries, which took place in May 2020, ended in a humiliating failure and was dismissively dubbed by some media ‘Bay of Piglets invasion’, referring to the CIA-baked failed invasion of Cuba in 1961.