Home / economy / Tanker attack: Qatar will become a competitor of Russia on the European gas market

Tanker attack: Qatar will become a competitor of Russia on the European gas market 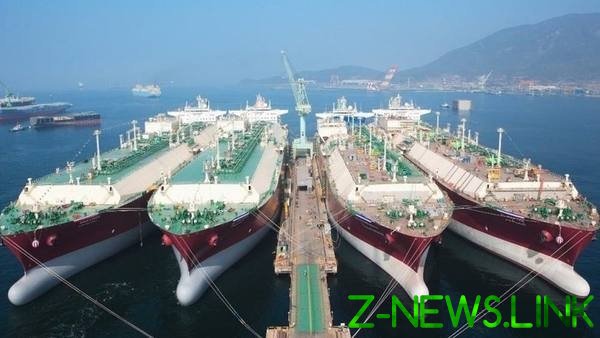 Qatar announced the construction of 100 new tankers for liquefied natural gas in addition to the already existing.

About the plans of this Arabian state wrote in his blog analyst Anatoly nesmiyan:

“Qatar petroleum” company – government of Qatar for the production and sale of liquefied natural gas announced the launch of a program of construction of 100 new tankers in addition to available. The program is focused on increasing gas production at the Deposit “North” of 77 million tonnes of LNG per year to 110 million tons. The difference of 33 mln tons in terms of cubic meters – about 45 billion cubic meters of gas per year. It is just the export capacity of the Turkish stream, if Putin was able to defeat Turkey in Syria and to push this project.

Qatar focuses its trade on China and markets in Southeast Asia: while the prices are rather high and therefore attractive for the exchange (spot) trade. However, with increasing supply from both the Qatar and other players (Indonesia, Australia, USA) Qatar will be forced to pay attention to the European market.

Yet Qatar has serious problems in this area: he miserably lost to Saudi Arabia in Egypt, and lost control of the Suez canal, which was in his pocket from 12 to 13 years, when the authorities in Egypt were the Muslim brotherhood. Now serious problem in Qatar in Libya, where the same Saudis with the help of the Haftarot gangs trying to overthrow the government of the Muslim brotherhood in Tripoli, focused on Qatar. Significant problems in ally of Qatar, Iran and Yemen, and in Syria, where coalition with the Kurds SDS openly are preparing for the crossing of the Euphrates, and the capture of the Syrian border with Iraq under control. Another one passenger of Qatar – the Kremlin – has been a very serious problem in Sudan, where Putin intends to kick the crown Prince Mohammed. In General, the relations between the Kremlin and Qatar look extremely complex and largely strange – the Kremlin is interested in the fact that Qatar is to increase its sales in Southeast Asia, but has a counter to any plans of getting into Europe. That, in essence, one and the same.

Configuration threats transit Qatari tankers in Europe is extremely serious, therefore, a bitter fight is inevitable. You need to consider that Qatar is leveraged and this means that the reduction in the gas trade for him would be tantamount to bankruptcy. The current programme of capacity-LNG marketing – this is just an attempt to increase turnover and avoid financial collapse.

The struggle for European gas market can be fierce. Europe itself is extremely interested to receive gas from many sources, and therefore is quite sympathetic looks at competing suppliers. Even if it is conducted by military means on the peripheral in relation to Europe territories. Under any scenario, and the outcome of this struggle, Europe will have excess supply of gas in her direction will be stretched infrastructure, and competition not only among suppliers, but also methods of transport gas (pipeline gas and gas in form of LNG is, in fact, just different ways of transporting the same product, and pricing mechanisms they have are very different, which creates a good basis for Europe, which can vary and even to manipulate the providers based on their own benefit).

The Europeans are not interested in the fact that in the course of competition from the market suppliers but is keen to balance the offer. Russia in this sense, the most vulnerable, as it occupies a dominant position in the European market. Therefore, competitors, and Europe itself is interested in the significant decrease of Russia’s share in this market and replace them with the other players.

This crack and will try to climb Qatar. And apparently, his program of construction of the tankers comes from the expectation of reducing in the future the Russian share in it.