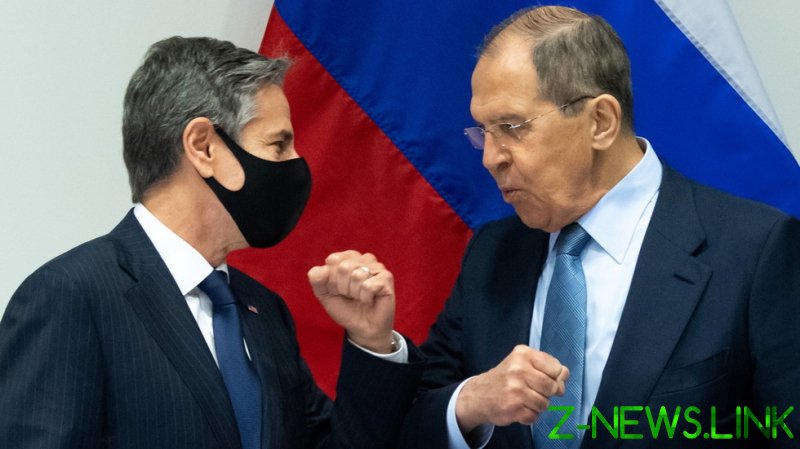 That’s according to an official statement from Ned Price, the spokesman for the US Department of State. Blinken and Lavrov met on the sidelines of the Arctic Council, currently meeting in the Icelandic capital of Reykjavik.

The readout revealed that Blinken raised Washington’s “deep concerns” regarding Moscow’s troop deployments “in and near Ukraine.” Last month, as part of an exercise, thousands of Russian soldiers and equipment were placed close to the frontier between the two countries. At the time, some accused the Kremlin of preparing for war. However, on April 22, Defense Minister Sergey Shoygu announced that the troops would return to their bases.

Blinken also discussed the treatment in Russia of US state-run outlets Voice of America and Radio Free Europe/Radio Liberty, both of which are registered as foreign agents by the Russian Justice Ministry. In recent weeks, RFE/RL has been fined millions of dollars for failure to comply with the law.

The Secretary of State brought up the wellbeing of Alexey Navalny, the imprisoned opposition figure currently serving a two-year and eight-month jail term for breaking the conditions of a suspended sentence handed to him in 2014. Last month, his allies expressed concerns that the activist’s health was rapidly deteriorating due to a hunger strike, which ended on April 23. He has now recovered completely, according to the head of Russia’s prison service.

As well as expressing concerns, Blinken also referenced places for cooperation, according to the statement. In particular, the two senior officials brought up issues in Syria, as well as the conflict between Armenia and Azerbaijan.

Speaking after the meeting, Lavrov called the discussions “constructive,” noting that the two sides understood “the need to overcome the unhealthy situation that developed between Moscow and Washington in previous years.”

“As Russian President Vladimir Putin has said many times, we are ready to consider and resolve any issues on our bilateral agenda,” he said.

Lavrov also noted Blinken’s “sense of determination” to improve the relationship between the US and Russia.