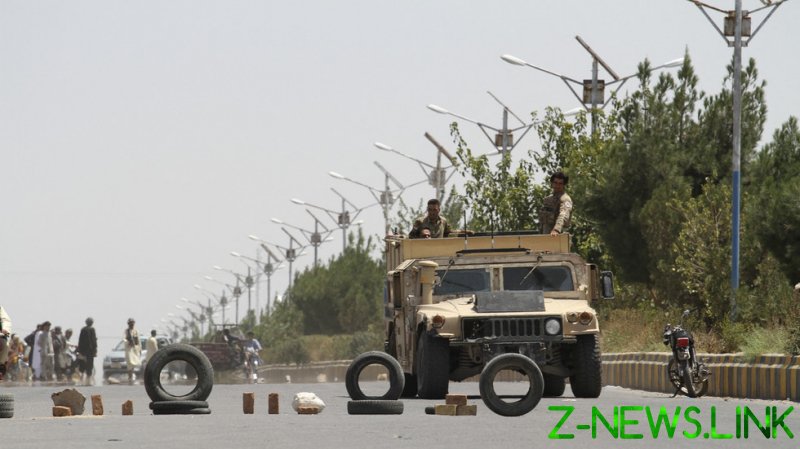 The militants seized all the key government buildings in the two cities overnight, pushing the government troops to military installations on their outskirts. The troops are currently clinging onto the airport in Kunduz, in the north of the country.

“Heavy clashes started yesterday afternoon. All government headquarters are in the control of the Taliban. Only the army base and the airport is with ANDSF [Afghan security forces] from where they are resisting the Taliban,” provincial lawmaker Amruddin Wali told Reuters.

Kunduz’s market was destroyed in the fighting, with disturbing footage purporting to show the whole location on fire. It was not immediately clear how exactly the market was obliterated, with some reports suggesting it was targeted by American warplanes supporting the Afghan troops. On Saturday, the US military launched airstrikes against the Taliban in a bid to halt its offensive, sending in B-52 Stratofortress strategic bombers and AC-130 Spectre gunships.

Although the Taliban claimed it was in full control of Kunduz, the government said it had re-deployed special forces units to the city and was trying to push back the militants. A short video released by Afghan military spokesperson Fawad Aman shows special forces troops advancing through the streets, firing at unseen adversaries.

The situation in the northwestern city of Sar-e Pul appears to be similar to that in Kunduz. Its key locations have been overrun by the militants, with government forces retreating to a military base on its fringes.

Over the past few days, the Taliban has put the government troops under heavy pressure, apparently switching the focus of its offensive from rural areas to major cities. Two provincial capitals, Zaranj in the southwest and Sheberghan in the north, have already fallen into the hands of the militant group.