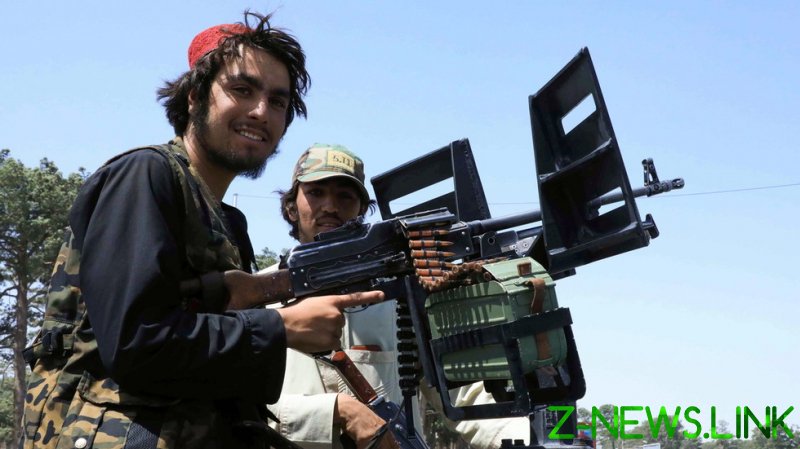 Taliban fighters have been advancing on Kabul from all sides, the Interior Ministry said. The capital, which is the only major urban area still under the control of the government of President Ashraf Ghani, has been fully encircled by the militants in recent days.

Several unnamed Afghan officials have confirmed to AP that the militants have been spotted in the outskirts of Kabul, in the Kalakan, Qarabagh, and Paghman districts.

The Taliban said it had instructed its fighters to refrain from violence in the capital and allow safe passage to those who choose to leave the city. The group claimed in a statement that they had no plans of taking the capital “by force.”

Taliban fighters have for now been ordered to remain at the entry points to Kabul, one of the group’s commanders – who is currently in the Qatari capital, Doha – told Reuters. The militants have not killed or injured anybody in the city, he insisted.

The group has started talks with the Afghan government on the “peaceful surrender” of Kabul, a Taliban spokesman said. The claim hasn’t yet been confirmed by the office of President Ghani.

Some officials have insisted there has so far been no fighting, but media reports claim sporadic gunshots have been heard in the capital.

State TV reported that clashes between the Taliban and the security forces are underway to the north and south of Kabul, but hadn’t yet impacted the central districts of the city.

The militants have taken control of Kabul University and have already raised their flag in one district, sources told the RIA-Novosti news agency.

The Afghan government insists the situation in Kabul “remains under control.” However, the authorities have made such statements numerous times, but could do nothing to prevent a rapid offensive by the Taliban that saw the radical group seizing most of the country in a matter of weeks.

With the Taliban claiming it wasn’t seeking revenge, and promising to “forgive” those who had worked for the government, videos have emerged on social media showing what is presumed to be an Afghan commander signing a document that would hand over his entire unit and all equipment to the militants.

The Taliban launched a large-scale offensive across the country amid the withdrawal of US and NATO troops, which is scheduled to be completed by August 31. It took the group just a few weeks to take control of some 20 provincial capitals, surround Kabul, and announce it was in full control of the national borders.