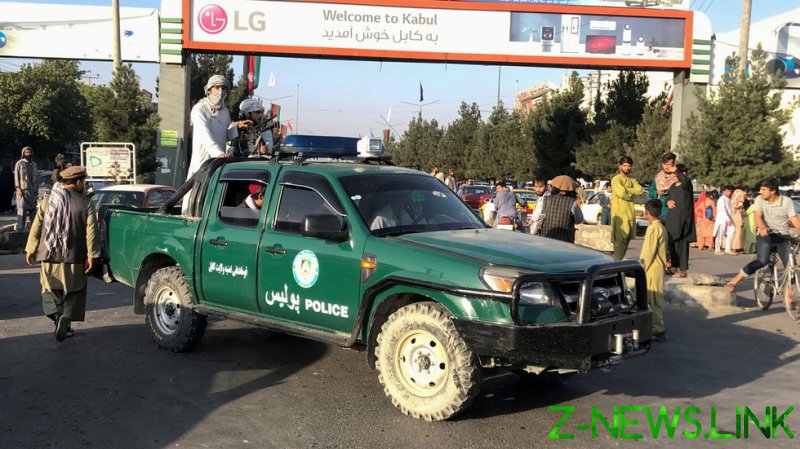 The Islamist group has been in control of most of Afghanistan since Sunday, when the US-backed government in Kabul surrendered without a fight, surprising the White House and the Pentagon alike. Up to 10,000 US citizens might be currently stranded in and around Kabul, with the Hamid Karzai International Airport (HKIA) the only lifeline out.

Civilians crowded outside the airport ducked as gunfire rang out overhead, videos from the airport showed on Wednesday. A Taliban official confirmed to Reuters that the group was firing into the air to disperse the crowds.

“We have no intention to injure anyone,” the official said. He blamed the US and its NATO allies for a “chaotic evacuation plan” resulting in the mass of people attempting to reach the airport.

Some of the US troops deployed to the airport also fired shots into the air overnight, but there were no reports of casualties or injuries, the Pentagon said on Wednesday. Some 4,500 US troops have been deployed to HKIA, Pentagon spokesman John Kirby told reporters.

While their official mission is to keep the airport secure, in practice that has amounted to holding the line against the thousands of Afghan civilians desperate to leave the country.

Images that emerged on Sunday, showing Afghans swarming the runway, climbing onto the planes – and dying as they fell off or got stuck in the landing gear – have sparked outrage in the US and widespread criticism of the Biden administration, prompting the White House to bring the president back to Washington from his Camp David vacation and have him address the press.

Kirby said the Pentagon was “in communication” with the Taliban, in an effort to make the evacuation “go faster and with more capacity.”

Over the past 24 hours, US transport planes have flown out about 2,000 people, including 325 Americans. There may be anywhere from 5,000 to 10,000 Americans in and near Kabul, according to Kirby’s interviews to US media on Tuesday.

“We have an obligation to get as many people out of Afghanistan as we can,” Kirby told reporters on Wednesday, but added that there were no plans to expand the security perimeter beyond Kabul, or help protect Americans trying to reach the capital from other parts of the country. He said the Taliban is not in control of any part of HKIA, but confirmed it has positions around the airport.

Some reporters have asked why the Pentagon chose to leave the Bagram Air Base north of Kabul, which unlike HKIA was easier to hold and had multiple runways. Kirby only responded that the decision to leave Bagram “was always part of the drawdown.” He added that the Pentagon still aims to finish the evacuation process by August 31, a deadline set by Biden.