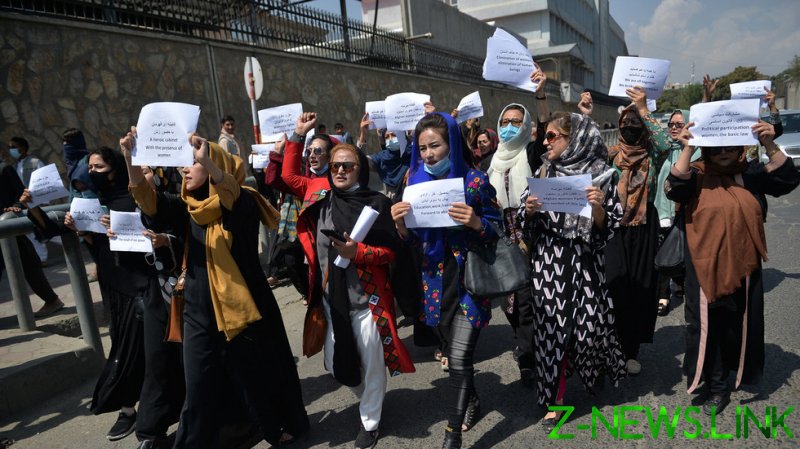 Organizers and activists told local media that the militants blocked them from marching to the Afghan presidential palace and dispersed the rally using tear gas and batons. They said several women were detained and at least one protester was injured when a Taliban member hit her on the head.

Videos from the protest show how women started to cough and covered their mouths as they confronted armed men in military gear blocking their path. One woman was seen taking a loudspeaker away from a man who appeared to urge protesters to leave.

Taliban spokesperson Zabihullah Mujahid told the Etilaatroz news website that organizers had failed to coordinate the protest with the militants, but did not comment on the reports of violence against protesters.

Afghan women have been demanding guarantees from the Taliban that they enjoy the same political, social and economic rights as men.

“We are not women of the 90s,” a protester in Kabul said, as quoted by Deutsche Welle, referring to the time when the hardline Islamist group first ruled Afghanistan.

The Taliban, which captured the majority of Afghanistan last month, initially promised that women will have more rights and freedoms than they did during the group’s previous rule between 1996 and 2001. During that time, women were not allowed to attend school or work and were forced to fully cover themselves from head to toe in public.

Last week, the militants advised women not to leave their homes for their own safety, saying that some fighters were not yet trained to treat women with respect and could harass them on the streets.

At the same time, images of women displayed on storefronts and in other public places in Kabul were vandalized or painted over shortly after the Taliban seized the capital on August 15.

UN High Commissioner for Human Rights Michelle Bachelet said last month that the treatment of women and girls by the Taliban will be “a fundamental red line” in the way the organization views the group’s rule.

The Taliban was knocked from power by a US-led invasion in 2001, when Washington declared a global war against Islamist terrorism following the 9/11 attacks. After nearly two decades of insurgency, the militants defeated the government in Kabul amid the final stage of the withdrawal of US forces. The last American soldiers left the country on August 30.