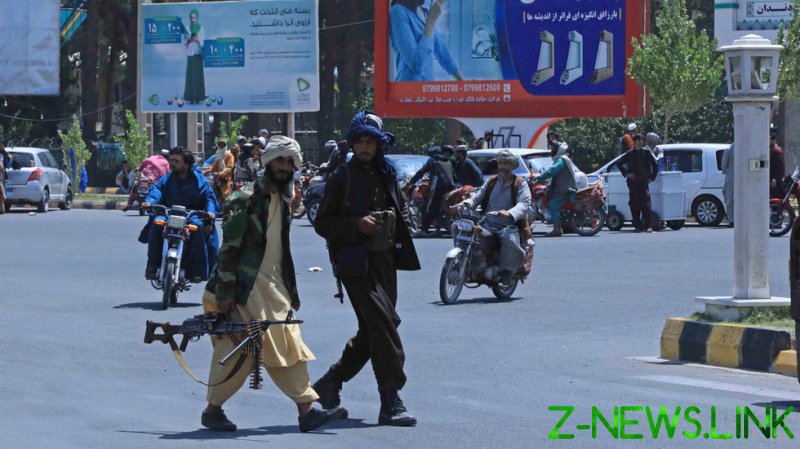 Reports suggest the city fell abruptly on Saturday, with officials and some troops fleeing to neighboring Uzbekistan. The capital of the Balkh province, it was widely regarded as a major government stronghold, but was captured largely without fighting, according to local sources.

READ MORE: ‘We are afraid’: Kabul residents uneasy as Taliban closes in on Afghan capital, slam Biden for withdrawing US troops

There were only sporadic clashes during the city’s overthrow, Hadid added, but the security forces had left behind their equipment and fled towards the border.

All key locations across Mazar-i-Sharif have been “completely conquered,” the Taliban said. The group also claimed it had captured lavish spoils in the city, seizing “a large number of vehicles, weapons, and equipment.” It stated that it would provide further details shortly.

The abrupt fall of the city comes only two days after Afghanistan’s President Ashraf Ghani visited Mazar-i-Sharif, rallying local groups for the fight against the Taliban. The battle for the city was also joined by veteran US-allied Uzbek warlord, Marshal Abdul Rashid Dostum.

Dostum went to Mazar-i-Sharif on Wednesday, arriving at the then-besieged city on a commercial jet alongside a group of armed men loyal to him. The fate of the 67-year-old warlord is currently unclear.

In recent days, the Taliban have seized large swaths of territory across Afghanistan, capturing multiple provincial capitals. Earlier in the day, it seized the town of Sharana, the capital of the eastern Paktika province, on the Pakistani border. The small province of Kunar, bordering Pakistan, has also fallen into the hands of the group, AP reported, citing local officials. The province was surrendered to the group without a fight.

The group also seized Pul-e-Alam, the capital of Logar province, just south of Kabul. Militants have now reached the outskirts of the national capital, being only some 11 kilometers (seven miles) from their ultimate destination. The Taliban now controls most of the country’s 34 provinces, with conflicting reports saying between 20 and 23 are already under Taliban control.