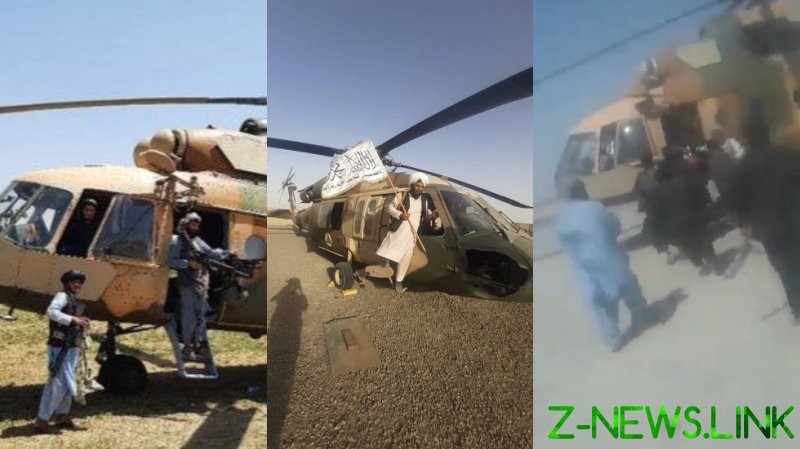 In recent days, the Taliban have captured large swaths of territory in Afghanistan, seizing multiple provincial capitals. It now reportedly controls about two thirds of the Afghan provinces. The group took large spoils from the government troops, capturing tons of munitions and weaponry, as well as hundreds of armored and soft vehicles.

The group also captured multiple military aircraft, including helicopters and UAVs, left behind by the government troops. For instance, the group reportedly seized a Mi-35 ground attack helicopter in Kunduz. The aircraft appears to be intact with only its rotor blades taken off.

Some of the aircraft appear to be non-operational and have visible damage. At least one beat-up UH-60 Blackhawk and one MD 530 helicopter were reportedly captured outside Ghazni.

The most lavish spoils have been seized in Herat and Kandahar, with the group releasing footage of multiple aircraft in their hands. Both major cities have large airports and military installations on their outskirts, now overrun by the militants.

Another video shows two Blackhawks, as well as two Mi-17 transport helicopters at hands of the militants at the Kandahar airfield.

Uncorroborated footage emerged on Saturday, purportedly shot at Kandahar airport, shows a Mi-17 and a UH-60 captured by the Taliban about to take off.

The Taliban seized more Afghan provinces on Saturday, capturing the town of Sharana, the capital of the eastern Paktika province bordering Pakistan. The town has not seen much actual fighting, falling into the group’s hands in mere hours. The provincial governor and other officials have surrendered to the Taliban, which allowed them to leave for Kabul, local lawmaker Khalid Asad told AP.

Meanwhile, the country’s capital has become an even less safe place for government officials, as fighting already reached the city’s outskirts. On Saturday, the Taliban militants seized Logar province and its capital Pul-e-Alam, located just south of Kabul. According to local officials, the militants reached the Char Asyab district, located just 11 kilometers (seven miles) away from the capital.

Afghan President Ashraf Ghani has been in talks with US Secretary of State Antony Blinken, focused on what the State Department called the “urgency of ongoing diplomatic and political efforts to reduce the violence,” while Ghani has publicly denied that he’s about to surrender.