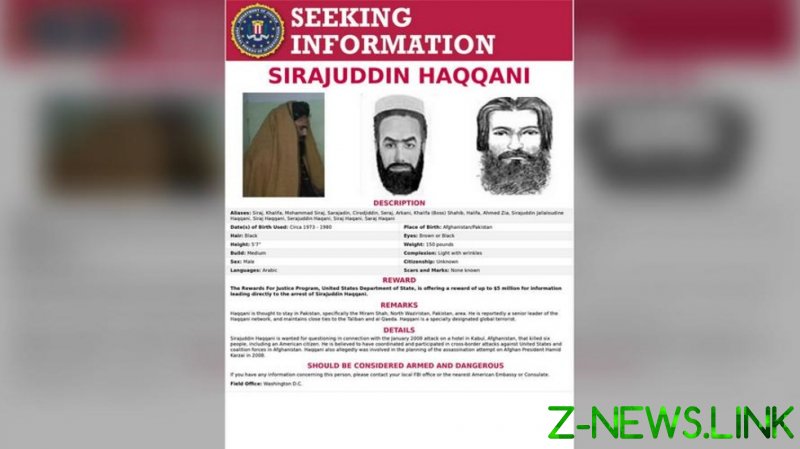 On Thursday, in a statement shared by Taliban spokesman Zabiullah Mujahid, the Islamist group said the inclusion of a minister from the interim Afghan government on the FBI list was a clear violation the Doha peace agreement.

Wanted by the FBI is the feared leader of the Haqqani militant group Sirajuddin Haqqani, announced on Tuesday as the country’s new interim interior minister.

The Taliban statement claims that Haqqani and his family are part of the Islamic Emirate of Afghanistan, adding that he does not go by a separate name or have any other affiliations. It claims that his wanted status should therefore be removed, and that it would be hostile to any attempts to interfere in the country’s internal affairs.

The Doha agreement was signed in 2020 by the Taliban and the administration of former US President Donald Trump. The pact formalized the end of hostilities between both sides, with the US agreeing to a withdrawal of all NATO troops while the Taliban pledges that areas of Afghanistan it controls would be kept clear of Al-Qaeda personnel.

The Haqqani militant group is believed to be associated with Al-Qaeda and has been responsible for some of the bloodiest attacks in Afghanistan, including a 2017 truck bomb that killed more than 150 people. It has been designated a terrorist organization by the US.

Haqqani himself is “wanted for questioning in connection with the January 2008 attack on a hotel in Kabul… that killed six people, including an American citizen,” according to his FBI profile. The FBI says that he was allegedly involved in planning the attempted assassination of former Afghan president Hamid Karzai in 2008.

On Tuesday, the Taliban announced its first interim government for the war-torn nation, which is now under the group’s control. In addition to the wanted Haqqani, four of those announced as ministers were previous inmates at the US high-security facility in Guantanamo Bay.

The four former inmates were released as part of a prisoner exchange for US Army deserter Bowe Bergdahl in 2014 by the administration of former President Barack Obama. The fifth Taliban member traded for Bergdahl is also a prominent member of Afghanistan’s new government, although not a minister.