Home / WORLD / ‘Taking vengeance because they believe in Allah’: Khabib says ‘pray for Palestine’ as he shares footage of mosque clashes 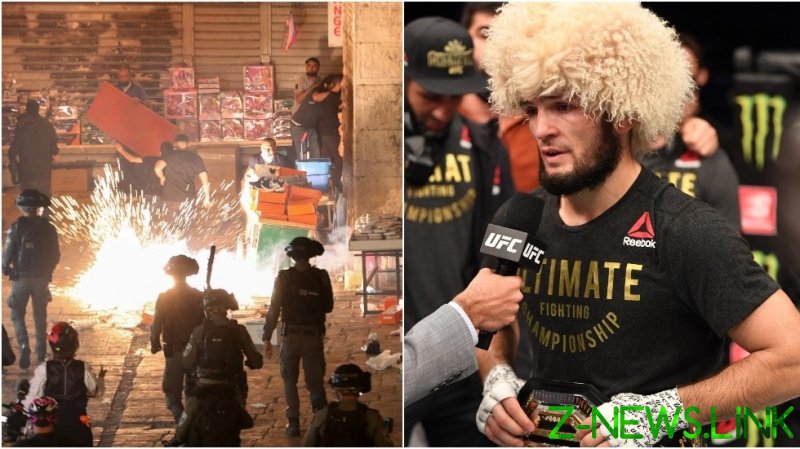 Tensions are high in Israel as around 300 injuries were reported last week after two separate raids of the Al-Aqsa mosque in Jerusalem by Israeli defense forces, prompting concerns that Palestinians could be forcibly be evicted from their homes.

The incidents have ramped up fears that the ongoing conflict could lead to further bloodshed after Israeli forces reportedly used tear gas and stun grenades in a raid of the holy site.

Seven people are understood to be in critical condition, while nine members of the Israeli forces are also said to have been injured.

Nurmagomedov, one of the most prominent Muslim athletes in the world, took to social media on Monday afternoon to post footage from the violence inside the mosque.

Writing in Russian, Khabib quoted a verse from the Koran translating as: “And they did not take vengeance on them for aught except that they believed in Allah, the Mighty, the Praised.”

Khabib was joined in his support for Palestinians by Chechen-born UFC star Khamzat Chimaev.

Also a devout Muslim, Chimaev made clear which side of the fracas he backs after he took to social media to post an image of Palestinian flag.

The undefeated Chimaev – who rapidly rose up the UFC ranks with three wins in his first 66 days with the world’s leading mixed martial arts league last year – has been no stranger to political issues since he exploded onto the scene in 2020.

He has been pictured with Chechen leader Ramzan Kadyrov on numerous occasions, with Kadyrov reportedly being instrumental in convincing Chimaev to reverse his decision to retire from the sport earlier this year.

Chimaev shocked the mixed martial arts landscape when he revealed on social media that he was close to ending his career – a reaction, many suspect, to a particularly nasty Covid-19 infection which prompted the cancellation of a much-hyped fight with Leon Edwards.

Nurmagomedov confirmed his own retirement from the UFC earlier this year after he resisted Dana White’s repeated advances to have him return to the Octagon for one final swan song.

However, the undefeated Russian star remains a hugely influential figure within the sport – and the larger Muslim community and was recently seen on a pilgrimage to Mecca.

Last year, Khabib hit out at French President Emmanuel Macron after the leader was accused of disrespecting Islam with his claims that the religion was “in crisis all over the world.”

On that occasion, Khabib posted a furious retort to Macron accompanied by an image of a bootmark imprinted on the French leader’s face.