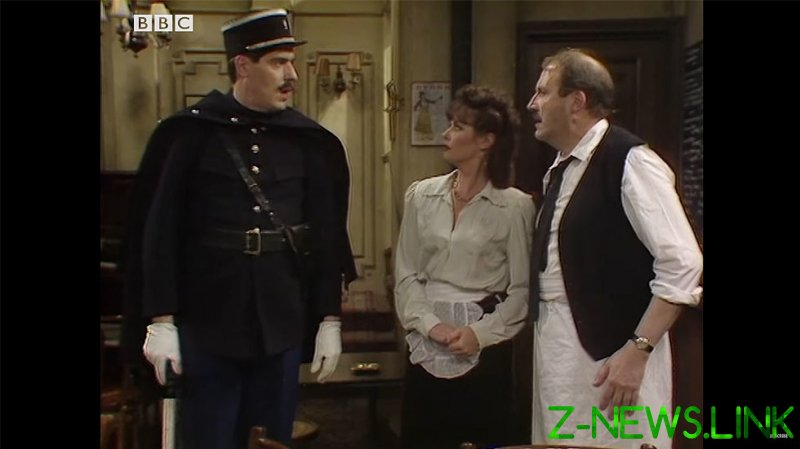 The BBC period comedy, which ran from 1982 to 1992, was centred around the various misadventures of an embattled French cafe-owner during WWII, whose business was both a front for the underground resistance and a favoured watering hole for occupying Nazi forces.

It featured a host of colourful characters speaking English in exaggerated German, French and Italian accents, and played on both British and European stereotypes. In addition to spawning still-popular catchphrases such as the greeting “Good Moaning,” other running gags included bungled operations, double entendres and pantomime sexual humour.

Although the series has been rerun on the public broadcaster in the decades since it last aired, Britbox – an online digital video subscription service offered by the BBC and ITV networks – has slapped a trigger warning on the show for the apparently ‘outdated’ content.

Before each episode of the show, the streaming service has included a viewer discretion warning that reads: “This classic comedy contains language and attitudes of the time that may offend some viewers.”

But the majority of social media users criticised the move as an example of “virtue signalling” and “woke outrage,” and reasoned that the show poked fun at all its characters, both European and English.

Conservative MP Paul Bristow said the show “takes the mick out of the Brits as much as it does the French, Germans and Italians.” Several people echoed that sentiment, with one person saying it “took the piss out of absolutely everyone with equal measure … including the English.”

As an example, a number of commenters pointed to the Officer Crabtree character – a spoof parody of an undercover British agent posing as a French police officer whose supposed fluency in French was belied by the frequently bemused reactions of other characters to his mangling of the language.

The ‘Vote Leave’ campaign waded into the controversy as well, with the Brexit group’s official account putting out a tweet that called out people “itching to say au revoir” to the show as being “unbelievably pathetic” for not being able to “take a joke.”

Some British commenters wondered whether “all the fuss” over the ‘offensive’ European accents and stereotypes was “because we left the EU,” but others said the viewer advisory warnings were more likely prompted by the “rampant sexism and homophobia prevalent in the 1980s.”

However, a number of people countered that such “pandering to snowflakes” was why viewers were “dropping the BBC license fee” – although it was unclear whether the public broadcaster had anything to do with Britbox’s decision.

“The BBC clearly has a lot of guilt for the classics it has broadcast over the years as they’re constantly slapping content warning on them. The corporation is now totally out of touch and at the mercy of woke millennials that are offended by everything,” the Defund the BBC campaign group tweeted.

The show was reportedly tipped to be remade some years ago, but there were apparently concerns within the BBC that portraying Nazi characters like incompetent Gestapo officer Herr Flick would cause offence.