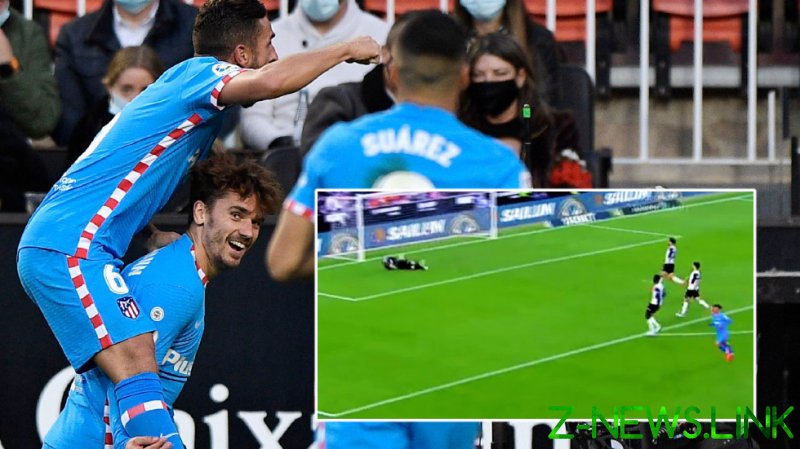 The 30-year-old put loan club Atletico 2-1 up at Valencia on Sunday with a wonderstrike worthy of former Barcelona teammate Lionel Messi.

Fellow former Barca outcast Luis Suarez had opened the scoring for the defending champions ten minutes before the break.

But after the resumption of play, defender Stefan Savic netted an own-goal to bring the hosts level.

Pressing in the manner coach Diego Simeone loves and intercepting play in his own half, the striker, who cost parent club Barcelona $139 million, then charged beyond the halfway line largely unchallenged as Suarez dragged a marker away with a run to open the field.

With only fellow Frenchman Mouctar Diakhaby obstructing his path to goal, Grizi slipped off to the left before letting off a thunderous shot that another former Blaugrana teammate, Jasper Cillessen, had no chance of stopping.

“Still thinking about that goal,” admitted Atleti’s social media account, while one fan pointed out that Griezmann has now bagged five in his last seven games and is “so much more than just goals”.

Three of those have come in the Champions League, and Griezmann is now starting to kick on domestically.

He initially struggled to re-adapt to life at the Wanda Metropolitano following two horror years in Catalonia after his mega-money switch from Atletico in 2019.

Griezmann’s superb goal was not enough to give Atleti three points despite Croatia full-back Sime Vrsaljko making it 3-1 after an hour.

Remarkably, 21-year-old Valencia substitute Hugo Duro, who is on loan from Getafe, pulled a goal back after 92 minutes, then equalized six minutes into injury time.

Atleti would have leapt into second place in the table with a win but are now fourth, four points behind leaders Real Madrid.

Griezmann will have wondered what might have been at full-time, and some Barca fans also appear to have regrets about his initial temporary departure from the Camp Nou. “Is it too late now to say sorry?,” asked one.

Sticking to their guns, another said: “Before I hear it, no – letting Griezmann go was not a mistake, regardless of his recent performances.

“Griezmann was never a bad player, he was just a bad fit. At Atleti, that isn’t the case. Cholo [Diego Simeone] knows what he wants from his players.”

Valencia moved up to tenth after going a fourth game unbeaten at home by earning a point in dramatic, last-gasp style.