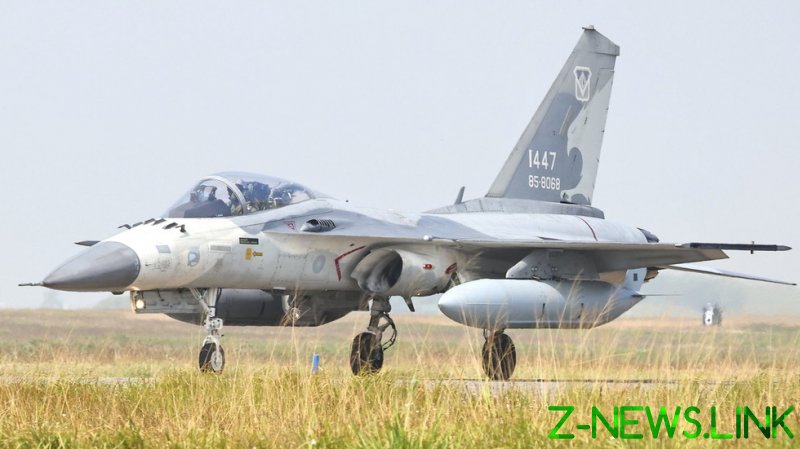 Multiple F-CK-1 Ching-kuo, Taiwan’s home-grown fighter jets, were scrambled from an airbase in the southern city of Tainan on Tuesday. The primary goal of the exercise was to rehearse a swift response to an incoming threat, with the jets getting from their reinforced shelters into the air in under five minutes.

“We are ready,” Colonel Lee Ching-shi told reporters invited to tour the base amid the drills. “We will not give up one inch of our territory.”

The drills come after Taiwan’s Defense Ministry reported that 13 Chinese warplanes crossed into its southwest air defense identification zone on Saturday. The island’s military says it is ready to defend itself from any potential hostility by mainland China.

“All the wings are under quite a lot of pressure, but as long as the air force is here, we will react according to related battle-readiness rules,” pilot Wang Chih-chan said, as quoted by Reuters.

Beijing routinely conducts surveillance flights around the island it considers to be an integral part of its territory. However, these flights do not commonly include numerous bombers with a large fighter jet escort, but rather only a few reconnaissance planes.
The latest incursion has already angered the US, which has reiterated its readiness to aid Taiwan’s “self-defense capability.”

“We will continue to assist Taiwan in maintaining a sufficient self-defense capability,” the US State Department said on Sunday. “Our commitment to Taiwan is rock solid, and contributes to the maintenance of peace and stability across the Taiwan Strait and within the region.”

The cozy relationship between Washington and Taipei has been repeatedly condemned by Beijing, which maintains that the US is interfering in its domestic affairs and trying to undermine the One-China Policy.

“We urge the US side to earnestly abide by the One-China principle and the three China-US joint communiqués, prudently and properly handle Taiwan-related issues, and refrain from sending any wrong signals to the ‘Taiwan independence’ forces so as to avoid damaging China-US relations and peace and stability across the Taiwan Strait,” Chinese Foreign Ministry spokesperson Zhao Lijian said on Monday.